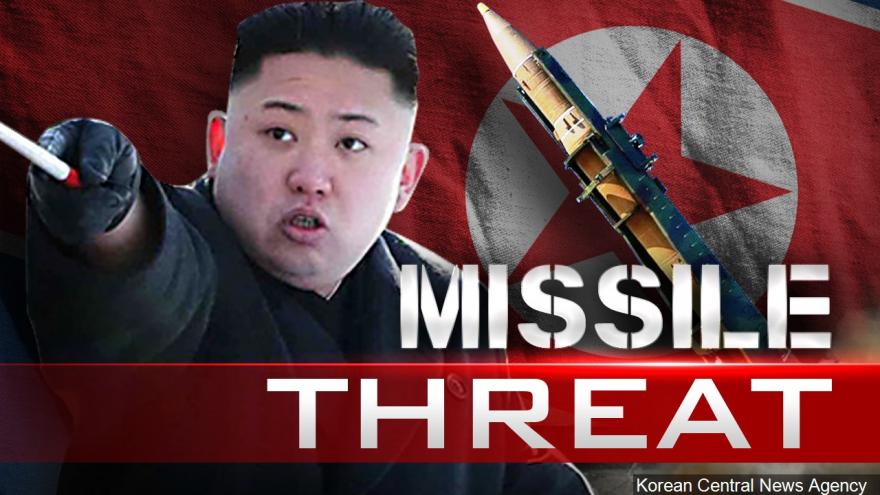 (CNN) -- North Korean military figures are putting the final touches on a plan to fire four missiles into the waters around the US territory of Guam, to be presented to leader Kim Jong Un within days.

In a statement last week, Gen. Kim Rak Gyom, commander of the Strategic Force of the Korean People's Army, said the plan to fire "four Hwasong-12 intermediate-range strategic ballistic rockets ... to signal a crucial warning to the US" would be ready by "mid-August."

Recent days have seen a significant escalation of tensions in the region as preparations are put in place for a possible launch in Guam, Japan and South Korea.

A notice put out by Guam's Joint Information Center Saturday warned residents how to prepare "for an imminent missile threat."

"Do not look at the flash or fireball -- it can blind you," the note said. "Lie flat on the ground and cover your head. If the explosion is some distance away, it could take 30 seconds or more for the blast wave to hit."

On Saturday, some of Japan's land-based Patriot Advanced Capability-3 (PAC-3) missile interceptors began arriving at Japanese Self Defense Forces (SDF) bases in three of the four prefectures any North Korean missiles would likely fly over en route to Guam.

Pyongyang identified three of those areas -- Shimane, Hiroshima and Kochi prefectures -- in its statement last week.

A spokesman for SDF said the missiles were being deployed not to intercept missiles, but rather "just in case." He did not elaborate.

Sim Tack, a senior analyst for private intelligence firm Stratfor, said the Japanese batteries are designed for protecting the area where they are deployed, "(they are) not meant to shoot missiles out of the sky as they pass over Japan at high altitude."

"So unless those North Korean missiles were to fall short, the Patriots shouldn't have a function to serve in this particular case," he said.

The SDF spokesman said the country's Aegis ballistic missile defense system was deployed in the waters between Japan and the Korean Peninsula, but would not give a specific location.

Aegis is able to track 100 missiles simultaneously and fire interceptors to take out an enemy's ballistic projectiles.

In South Korea, where both the military and civilians are used to facing threats from North Korea, Defense Minister Song Young-moo warned the country's armed forces "to maintain full readiness" to "immediately punish with powerful force" any action against the South.

"Recently, North Korea made its habitual absurd remarks that it will turn Seoul into a sea of fire and that it will strike near Guam," Song said according to ministry officials. "North Korea raising tension (on the Peninsula) is a serious challenge against the South Korean-US alliance and the international community."

Dunford was also expected to visit Japan and China while in the region, US defense officials said, along with a stop at the US Pacific Command in Hawaii. The multiday trip has been long scheduled and is not related to recent developments in North Korea, although that will be part of the talks.

Meanwhile, US-South Korean joint military exercises are due to begin later this month. The annual exercises, called Ulchi-Freedom Guardian, are expected to run from August 21 to 31.

Chinese President Xi Jinping and other world leaders have called for calm as both Pyongyang and Washington upped their saber-rattling rhetoric.

On Friday, US President Donald Trump doubled down on his statement that he would unleash "fire and fury like the world has never seen" if Pyongyang continued its threats, saying in a tweet that "military solutions" were "locked and loaded" for use against North Korea.

According to a statement from China's Ministry of Foreign Affairs, Xi told Trump in a call between the two leaders Saturday that all "relevant parties should exercise restraint and avoid words and actions that would escalate tensions on the Korean Peninsula."

French President Emmanuel Macron called for the international community to work with North Korea to "resume the path of dialogue without conditions," following a call with Trump Saturday.

Washington has previously said it will consider talks with Pyongyang if it agrees to give up its nuclear weapons program, a precondition North Korean officials have described as a non-starter.

Caught in the middle: The 4,000-year-old people sharing an island with the US military

At a church in central Guam on Sunday, parishioners sang "Lord, we pray for world peace" after discussing the potential North Korean threat.

Gofigan said there was not a lot of panic in Guam, and that people's faith -- the island has been overwhelmingly Catholic since the arrival of Spanish missionaries in the 17th century-- has been on display in recent days.

"Faith is so deeply rooted into our culture," he said.

The territory's governor, Eddie Baza Calvo, said he had spoken with Trump and the President's chief of staff, John Kelly, on Saturday.

"Both assured me that the people of Guam are safe," Calvo wrote on Facebook. "In the President's words they are behind us '1,000 percent.' As the head of the Government of Guam, I appreciate their reassurances that my family, my friends, everyone on this island, are all safe."

As an unincorporated US territory, citizens of Guam cannot vote in general elections. The island is also home to a large US military presence, a fact that has led to tension with some local residents, particularly those of the indigenous Chamorro community.

"Nobody really deserves to be caught in the middle of these games," said Victoria-Lola Leon Guerrero, an activist who campaigns for a lowered military presence.

"You're playing with people's lives. We just want peace, we just want to continue to enjoy our lives here."