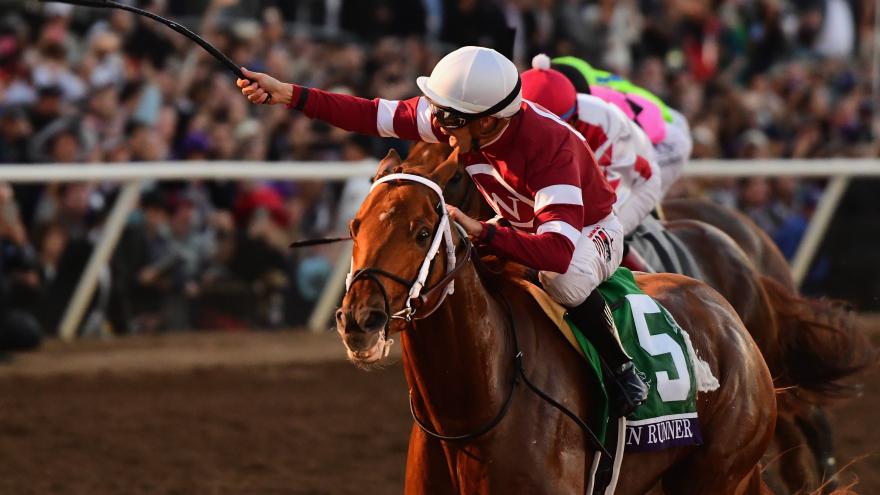 Gun Runner, the horse of the year, easily beat West Coast to win the $16 million event at Gulfstream Park in Hallandale Beach, Florida.

"For him to come through like he did today, overcome the draw -- just so proud of the horse. What a dream come true he is," trainer Steve Asmussen said. "He's just a special individual."

Gun Runner went off a 4-to-5 favorite from the difficult-to-win-from No. 10 post but got a magnificent start and raced over to hang on the shoulder of early leader Collected.

Collected stayed ahead down the backside while Gun Runner and Geroux waited for their time.

As the horses powered through the final turn, Gun Runner pulled away as West Coast chased valiantly but in vain. Gun Runner was too strong and won the 1 1/8-mile event in 1:47.21.

The win means Gun Runner won the final five races of his career, including the Breeder's Cup Classic in November.

"It's hard not to smile when you're thinking of Gun Runner, what he just accomplished. This has been an unbelievable week, unbelievable year," owner Ron Winchell said about the win earlier this week for horse of the year.

Owners paid $1 million for each spot with organizers adding the rest. First prize is $7 million, second scoops $1.6 million and the sliding scale drops down to $650,000 for finishing sixth to 12th.

The Pegasus World Cup was introduced for 2017 by US racecourse giants the Stronach Group, usurping the Dubai World Cup as the richest race in the sport with an initial purse of $12 million.

The big-money showdown, which unlike many other big races is open to 4-year-olds and above, was won last year by the Bob Baffert-trained Arrogate after a final duel with old rival and two-time Horse of the Year California Chrome.