Gun thefts, burglaries, attack on MSP trooper could be connected 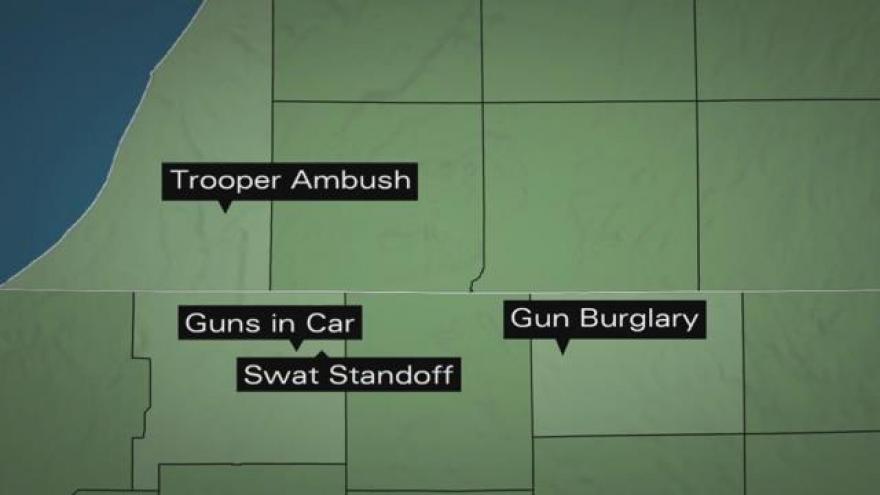 Multiple burglaries reported in Michigan and Indiana, the attack on a Michigan State Police trooper and the SWAT incident in Mishawaka could all be related, according to information gathered from multiple police reports, court documents and press releases.

Police and deputies have not said whether these incidents are related and there have been no arrests in the burglaries or break-ins.

February 9
Michael Barber was spotted at Dutchman Hunting Supply. Employees later told police he went to all four corners of the building but only purchased a soda, according to a probable cause affidavit.

February 10
Dutchman Hunting Supply was burglarized and 15 guns were stolen.

February 20 - Midnight - 8 a.m.
Four businesses in Van Buren County were burglarized between midnight and 8 a.m. One item that was stolen was a 2013 Suzuki motorcycle. Van Buren County deputies said the motorcycle was recovered later in the day by the Michigan State Police Niles Post.

February 20 - 8:43 a.m.
A motorcycle stolen out of Van Buren County was spotted at 8:43 a.m. by a Michigan State Police trooper on the US 31 bypass in Niles. He attempted to conduct a traffic stop, but the driver did not pull over. When the driver crashed, he and his brother allegedly attacked the MSP trooper.

Two bystanders assisted the trooper and the two men were taken into custody. They were identified as Michael Barber and his brother Travis Wise.

February 25 - 1:45 a.m.
Early in the morning, Mishawaka Police conducted a traffic stop on a Taurus with a possibly stolen license plate. There were three people inside the vehicle, a male driver and two female passengers.

The driver, identified as Anthony Chipps, had a suspended license according to police reports. He also allegedly had prescription drugs in his possession but did not have a prescription.

After deciding to impound the vehicle, police conducted an inventory of the vehicle.

In the area of the driver's seat, police found a handgun they learned was stolen from Dutchman Hunting Supply, according to the police report.

In the back seat in a purse allegedly belonging to Stephanie Smolka, police say they located another handgun, allegedly stolen from Dutchman Hunting Supply.

Chipps was arrested and charged with carrying a handgun without a license and possession of a controlled substance.

The third passenger, Stephanie Weeks, was arrested on an outstanding warrant.

Smolka was arrested for one count of carrying a handgun without a license.

Smolka told police Chipps got his guns from Michael Barber. She also told them she knew of a home on Walnut Street in Mishawaka where there was marijuana, counterfeit currency and multiple guns.

SWAT and Mishawaka Police went to the home on Walnut Street to execute a search warrant.

While executing the search warrant, Rodney James Ross drove up and told police it was his home. He got out of the vehicle and had a gun in plain view.

Police said the gun was one of the guns stolen from Dutchman Hunting Supply.

Ross told police he traded stereo equipment to Chipps in exchange for the gun and a crossbow.

Ross was arrested on one count of theft of a firearm and carrying a handgun without a license.