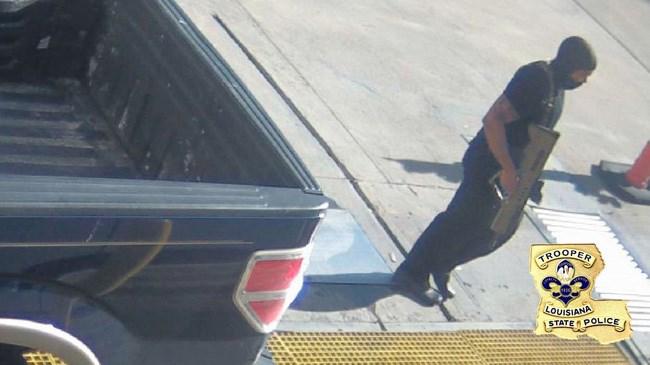 (CNN) -- Shortly before the ambush that killed three law enforcement officers in Louisiana, the gunman was stalking a Baton Rouge police car with his rifle poised to shoot, police said.

Scouting the area in a rental car, Gavin Long initially spotted the patrol car at a convenience store Sunday morning and parked next door, only to find an empty squad car, said Col. Michael D. Edmonson of the Louisiana State Police, who outlined the gunman's movements Monday with Sheriff Sid Gautreaux.

Long then drove north on Airline Highway and saw another patrol officer vacuuming his vehicle at a car wash. By the time he had exited his car, that officer also disappeared.

Long made his way back behind buildings near the B-Quik convenience store. Baton Rouge Officers Matthew Gerald, 41, and Montrell Jackson, 32, were behind the building next to the B-Quik along with sheriff's Deputy Brad Garafola, Edmonson said.

Skilled in his handling of an assault rifle, Long, an ex-Marine, moved to ambush the officers, Edmonson said. Surveillance video captured the calculated attack and showed a scene that was "chilling in the sheer brutality," he said.

"There is no doubt whatsoever that these officers were targeted and assassinated," he said.

Long appears to have been in Baton Rouge for days planning his attack, which also wounded three other officers. Investigators are tracking his whereabouts before the 8:40 a.m. Sunday ambush to determine with whom he had contact and who may have known about his plans, Edmonson said.

"We want to know what brought him here, what kept him here" and why he killed police, he said.

The Baton Rouge ambush followed on the heels of the Dallas attack on officers, both cases involving skilled gunmen and multiple casualties.

Gautreaux, the East Baton Rouge Parish sheriff, said he was convinced that if the Baton Rouge SWAT team had not arrived when it did, two additional deputies who were wounded would be dead and the gunman would have escaped to attack more officers.

The SWAT team's training kicked in, and it performed flawlessly in responding to the ambush, an emotional Baton Rouge police Chief Carl Dabadie Jr. said.

A SWAT team rifleman took out the gunman from more than 100 yards without a clear line of sight, Dabadie said.

"This guy was going to another location. He was not going to stop here," the chief told reporters. "He was going to take more lives."

Long used a IWI Tavor SAR 5.56 rifle with a strap on it to keep the rifle in place as he engaged the officers, helping him maintain accuracy. He also was armed with a 9mm pistol and a Stag Arms M4 variant 5.56 rifle. The rifle was staged inside his Chevrolet Malibu rental car so he could get to it during the shooting, Edmonson said.

"He was extremely accurate," he said.

Details of the ambush

Long used the front of the building next to the B-Quik for cover and then pivoted the corner, ready to fire, saw the two Baton Rouge officers and shot them, killing one immediately and wounding the other, Edmonson said.

Long stepped from around the corner in the back of the building and shot the deputy, who fell to the ground from where he returned fire, authorities said.

"My deputy went down fighting," Gautreaux said. "He returned fire to the very end. We could actually see in the video the bullets hitting the concrete around him."

Once Long killed Garafola, he saw the other wounded officer move and "shot him twice," Gautreaux said.

Long shot and wounded an unidentified police officer who had pulled up in front of the building. The attacker then retreated back to the Malibu he had parked behind a fitness center several hundred yards away, using the businesses and woods for cover, Gautreaux said.

Back at the fitness center, Deputy Nicholas Tullier, 41, had just got back in his patrol car to run the tag of the Malibu when Long emerged in the parking lot, Gautreaux said.

Long opened fire on the deputy immediately, shooting as he walked toward the patrol car, Gautreaux said.

He took long shots at another arriving deputy in the front parking lot, shattering the bone running from his elbow to his shoulder, Gautreaux said.

Deputy Bruce Simmons, 51, now has a titanium rod in his arm and faces more surgery for his wounds, Gautreaux said.

It was then that Baton Rouge Police SWAT saved the day, he said. Pulling up in front of Benny's Car Wash, a rifleman saw the gunman and managed to kill him with a 100-yard-plus shot despite buildings and other obstructions, Gautreaux said.

"I am convinced if Baton Rouge city SWAT would not have arrived at the scene we would have two more deceased deputies and this guy would have been in a position to get in his car and seek other targets," Gautreaux said.

Edmonson said authorities are convinced that Long was the only shooter, but they plan an extensive investigation to determine whether he had any help or was affiliated or encouraged by any group.

"This is a big puzzle," he said. "Three officers are dead and one is fighting for his life, and we owe it to them to do it right and get it right. We owe that to them."

The deaths of Jackson, Gerald and Garafola have kept the spotlight on the city of 230,000 people, where the July 5 fatal shooting of Alton Sterling at the hands of police began what has been two weeks of national turmoil.

"We as a nation have to be loud and clear that nothing justifies violence against law enforcement," President Barack Obama said. "Attacks on police are an attack on all of us, and the rule of law that makes society possible."

Since Sterling's death, the Baton Rouge Police Department has worried about threats against officers.

It has been an emotionally charged few days across the country because of protests stemming from Sterling's death and the shooting by police of Philando Castile in Minnesota, plus the five officer deaths in Dallas by a sniper.

Police across the country are taking precautions.

The New York Police Department is doubling up all foot patrols and security posts, according to a memo obtained by CNN. Officers are also being instructed to take all meals and personal breaks in pairs. The Pittsburgh Bureau of Police is closely monitoring all calls for service and making sure backup is available under all circumstances.

In Cleveland, the police union asked Gov. John Kasich to restrict the state's open carry laws temporarily for the Republican National Convention in light of the events in Baton Rouge.

For better protection, the Boston and Sacramento, California, police departments are requiring that two officers be in every patrol unit.

Indianapolis police are ordering officers to go through training on how to recognize an ambush before it happens and what to do if they find themselves the target of one. Two officers in the Baltimore Police Department must now respond to every call.

Several departments across the country told CNN that they are taking more safety measures, but declined to describe them.

Obama urged a stop to the bloodshed.

"Only we can prove, through words and through deeds, that we will not be divided," the President said Sunday. "And we're going to have to keep on doing it again and again and again. That's how this country gets united."

Officer Gerald had been serving for less than a year and had joined the Baton Rouge force after extensive military service, with stints in both the Army and the Marines, with three tours in Iraq, Dabadie said.

"His sense of service drew him to law enforcement when he got out of the military," Dabadie said.

Dabadie said he had last spoken to Jackson, whose son turned 4 months old Monday, a few days ago when he had gone to boost the morale of the badly demoralized department.

Instead, Jackson ended up giving him a pep talk, Dabadie said.

Jackson, a 10-year veteran of the force, had posted on Facebook on July 8 how physically and emotionally drained he had been since protests had erupted in Baton Rouge after Sterling's killing.

"I swear to God I love this city, but I wonder if this city loves me. In uniform I get nasty, hateful looks and out of uniform some consider me a threat. ... These are trying times. Please don't let hate infect your heart."

Garafola worked for the East Baton Rouge Sheriff's Office for 24 years, according to Casey Rayborn Hicks, a spokesman for the sheriff's office.

He had four children, Gautreaux said.

Meanwhile, Tullier is "fighting for his life," and Simmons, who has 23 years of service, faces months of recovery, Gautreaux said.

Long, a black man from Kansas City, Missouri, was discharged from the Marines as a sergeant in 2010.

CNN has filed a Freedom of Information Act request with the military to obtain records about Long's service. Under Defense Department rules, health records that might include any information on Long's mental health are considered protected, even though he is dead. The records are part of the criminal investigation.

CNN has filed a similar request for the records of Micah Johnson, also formerly a military member. He killed five police officers in Dallas, and a criminal investigation is ongoing about his military record.

Long served from August 22, 2005, to August 1, 2010, according to the little information the military has released. He was a data network specialist who received the Marine Corps Good Conduct Medal, Navy Unit Commendation Medal and others. He signed up for the service in Kansas City and deployed to Iraq from June 2008 to January 2009.

The releasable record on Long doesn't indicate where he worked in Iraq.

He left a long trail of information online about his beliefs under the pseudonym Cosmo Setepenra.