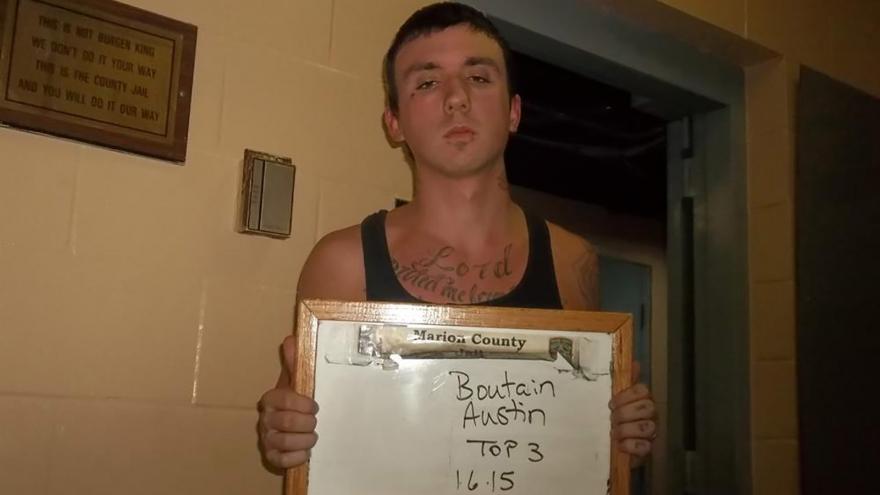 Salt Lake City, UT (KSL) -- Police released harrowing details Wednesday about a carjacking attempt near the University of Utah this week that left one student dead and another fleeing for her life.

They also revealed how the accused gunman slipped away from officers hunting for him after the incident, making his way downtown where he was spotted a day later by an observant librarian.

University police confirmed Wednesday that after shooting and killing ChenWei Guo, 23, during an attempt to steal the student's car, the accused gunman, Austin Boutain, tried to force a woman who was with Guo at the time to walk up into the hills above the university with him.

"(The woman) took an opportunity when Mr. Boutain was distracted and fled on foot, at which time Mr. Boutain fired two times at (the woman), narrowly missing her," police said in a prepared statement.

Boutain told police he tried to kill the woman "so there were no witnesses," according to a Salt Lake County Jail report.

Police did not specify how long they believe Boutain kept the woman with him or how far they walked before she escaped. They also declined to release the woman’s name Wednesday, but said she was a student and a friend of Guo.

Guo, who was born in Beijing, was a pre-computer science major and a peer adviser with the International Student and Scholar Services Office.

The shooting prompted an extensive manhunt in the hills above the University of Utah by police officers from multiple jurisdictions. Investigators now believe Boutain, who fled into the hills following the shooting, evaded more than 100 officers combing the area by staying low and crawling far up the mountainside and then north into the Upper Avenues neighborhood, according to the statement.

From there, police say Boutain worked his way back down toward the center of the city and the neighborhood surrounding the downtown homeless shelter where he ditched the stolen gun allegedly used to kill Guo. A report indicates Boutain stashed the gun in a hole in a brick wall near the shelter, but said it was gone when he returned for it later.

Boutain, 24, was arrested Tuesday afternoon at the Salt Lake Main Library after a librarian there recognized him from news reports and notified security.

Surveillance footage released by the library Wednesday shows three guards bringing a calm Boutain into a tiny room before one security guard handcuffed and patted down the suspect as he knelt on a bench. Boutain does not appear to have a gun in the video but officers pulled something small from his back jeans pocket.

Surveillance video elsewhere in the library shows Boutain calmly walking into its east entrance moments earlier while wearing a white T-shirt, a black beanie hat and jeans. He is seen taking the elevator and going into a third-floor bathroom as officers waited outside. They have said he told them he wanted to use the restroom before they arrested him.

Time stamps on the footage indicate Boutain was in the library for roughly 25 minutes on Monday.

Boutain and his wife, Kathleen Boutain, were also named as suspects Wednesday in the death of a man in Golden, Colorado. Mitchell Bradford Ingle, 63, was found dead in his RV at the Clear Creek RV Park when police in Utah notified the Colorado department that the Boutains had come to the state in a truck believed to have been stolen from Ingle.

The Golden Police Department has yet to release details about how Ingle died, but said Wednesday that the death appears to be a homicide.

Three guns are also believed to have been stolen from Ingle: a .44 caliber Ruger that police believe Boutain used to kill Guo, a .38 caliber Smith and Wesson that Boutain told police he traded for an ounce of marijuana, and a rifle that was recovered by officers from the Boutains' makeshift camp.

Both the gun allegedly used in the killing and the gun believed to have been traded for drugs were still missing as of Wednesday, according to U. Police Chief Dale Brophy. Ingles' truck — a green Ford F-350 pickup with Colorado license plate No. 460DZX — was also still outstanding. Brophy said the Boutains gave the truck to another homeless couple when they arrived in Utah.

Police said the couple came to the Salt Lake area on Saturday after fleeing Colorado, mostly spending their time downtown mixing in with the city's homeless population. They were familiar with the city, according to police, from a previous visit.

Police described the couple as "drifters who traveled frequently from state to state." Austin Boutain appears to have a criminal history stretching across Ohio, Alabama, Mississippi and Wisconsin, according to media reports from other states.

The dramatic string of events began Monday evening when Kathleen Boutain walked down to the school from the makeshift camp in the hills where she and her husband had been staying to report a domestic incident between the two of them to police.

As officers were planning how to approach Austin Boutain — who was armed and likely in the Red Butte area near the campus, according to his wife — dispatchers received a second call of a shooting about 9 p.m.

Brophy said Wednesday that investigators are still working to piece together a timeline of the incident, including when Kathleen Boutain first contacted law enforcement and when Guo was shot.

While police originally said Boutain had made the report about her husband around 8:15 or 8:30 p.m., Brophy said Wednesday it was likely closer to 8 p.m. A campus alert warning students about a gunman and urging them to shelter in place wasn't sent out until about 9 p.m., after the shooting had occurred.

Funeral arrangement for Guo have not been announced. Friends and classmates have described Guo, who would have turned 24 on Sunday, as kind-hearted, ambitious and unfailingly optimistic. Guo was a member of The Church of Jesus Christ of Latter-day Saints and served as a missionary for the church in Provo. He also served as a volunteer interpreter for the church.

In a statement Tuesday, University of Utah President David W. Pershing called the shooting a "senseless, random act of violence." The school is arranging for Guo's parents to be brought to Utah, he said.

The Boutains remained in the Salt Lake County Jail on Wednesday.

Salt Lake County District Attorney Sim Gill said Wednesday that his office is still screening charges against the couple, who will remain in jail in the meantime. A spokeswoman for the FBI in Salt Lake City confirmed that federal investigators are also looking at the case.