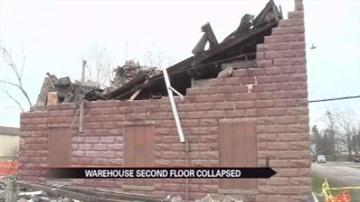 GOSHEN, Ind. -- The wind was so gusty on Monday, it brought down part of historic building in Goshen.

The second story of a warehouse belonging to Closet Craft collapsed.

The building on Lincoln Avenue had been there since the early 1900s.

The owner said employees heard the collapse from a nearby location and quickly called him.

"It was contained to a small area it didn't explode. No cars were hurt anybody was hurt so that's what I was mostly concerned about," said Rolando Oritiz, owner of Closet Craft.

Closet Craft has not used the building for about a year or two. They had been using it as storage.

The owner believes it will have to be torn down.