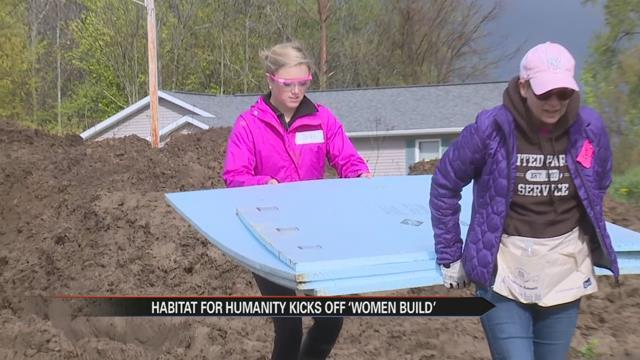 ABC57 Meteorologist Jackie Layer helped out with the Habitat for Humanity Women's Build Project on Wednesday.

The groundbreaking was held in Goshen Wednesday morning. Goshen Mayor Jeremy Stutsman and Congresswoman Jackie Walorski spoke at the event along with representatives from Habitat for Humanity, Lowe's, Goshen College and the Goshen and Elkhart Chambers of Commerce.

Although nationally, the Women's Build Project is only a week long, in Elkhart County - it will be a month long event.

Habitat for Humanity of Elkhart County is expecting 250 volunteers throughout the month.

"One of the really neat things about all the volunteers coming out today is each of them volunteered their aid and dollars so that money is going towards this build to making this possible," said Amy Zakiewicz, Director of Development for Habitat for Humanity.

More than 80,000 women from all 50 states have volunteered at the eight previous National Women Build Week events, according to Habitat for Humanity.

Beacon Health's mobile testing clinic will be at Goodwill on Friday