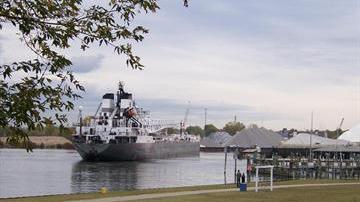 SAINT JOSEPH, Mich. - Saint Joseph Harbormaster Larry LaValley said Thursday commercial boats can no longer navigate the Saint Joseph Harbor. A buildup of sand is too high for ships to enter the channel. "It's highly unlikely a boat could ever come through with this amount of water," said LaValley.

The problem was first discovered December 6th when the Manitowoc, a ship carrying more than 12 thousand pounds of limestone got stuck in the bottom of the channel and was diverted to another port. “In the last week there’ve been two boats diverted out of the Saint Joseph Harbor,” said LaValley. The other boat he said was headed to LaFarge, a commercial dock in the harbor.
Tuesday measurements were taken by LaFarge that found the current depth was 15 feet, 8 inches. The harbor was designed to be 21 feet deep.
Currently there is no federal money for dredging the Saint Joseph Harbor in 2012. Budget cuts to the Army Corps of Engineers eliminated that service for many smaller ports in the Great Lakes. LaValley said he hasn’t heard of other ports in Lake Michigan needing to close yet from a buildup of sand. “If it hasn’t happened yet, it will,” he said.

Many commercial docks feel that the Harbor Maintenance Trust Fund should pay for dredging. Everytime a ship docks, taxes and fees are paid. That money enters the fund which currently sits at $6 billion in federal bonds. in 2010 the fund collected more than $1 billion. The fund could be used if congress would allow it.

"Let’s be factual, if this situation continues to degenerate, it isn't going to be long when recreation vessels will no longer be able to use this river," said LaValley.