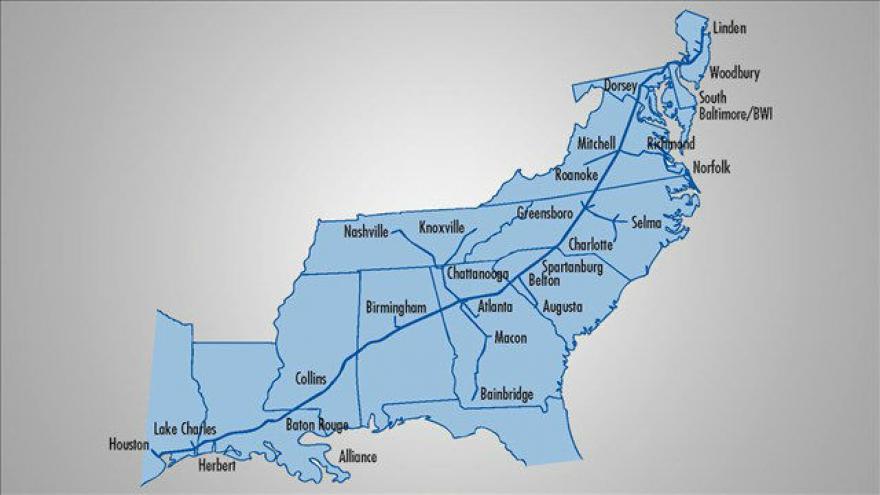 The Colonial Pipeline, which carries huge amounts of gasoline and other fuel between Houston and the East Coast, is shutting down after Harvey forced the closure of refineries and some of the pipeline\\\'s own facilities.

The Colonial Pipeline, which carries huge amounts of gasoline and other fuel between Houston and the East Coast, is shutting down after Harvey forced the closure of refineries and some of the pipeline's own facilities.

The pipeline has two main lines that together transport more than 100 million gallons of gasoline, heating oil and aviation fuel as far as the New York harbor each day.

Its operator said the line that carries mainly diesel and aviation fuels will stop running Wednesday evening, and the line for gasoline, which is already operating at a reduced rate, will be suspended Thursday.

"Once Colonial is able to ensure that its facilities are safe to operate and refiners in Lake Charles and points east have the ability to move product to Colonial, our system will resume operations," it said.

Power outages during Hurricanes Katrina and Rita in 2005 forced the shutdown of parts of the Colonial Pipeline for several days. It also twice had to suspend services last year due to a leak and a fire.

Colonial noted that there are other ways of delivering fuel to limit the disruption to supply, including trucks, barges and other pipelines.

Earlier Wednesday, the largest oil refinery in the country started shutting down as Harvey, which has now weakened to become a tropical depression, caused more catastrophic flooding along the Gulf Coast.

Thirteen oil refineries are offline due to the storm, and flooding has knocked out around a fifth of the nation's refining capacity, according to S&P Global Platts.