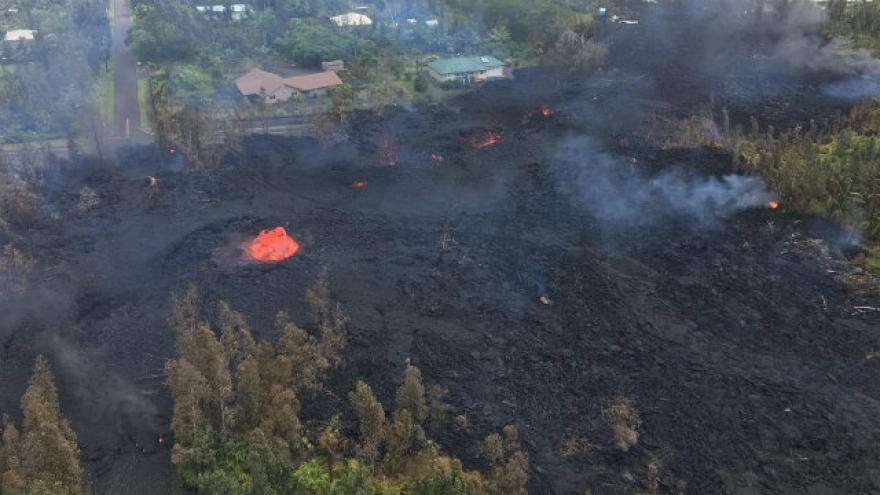 In the Leilani Estates Subdivision, fissure 7 was active for several hours on May 5 with large bubble bursts and spatter. Photo courtesy USGS

By Faith Karimi and Jason Hanna

The US Geological Survey's Hawaiian Volcano Observatory on Wednesday warned of possible explosive eruptions in the coming weeks. That could happen because as lava continues to sink in a lake inside a Kilauea crater, an influx of groundwater could interact with the lava to create steam explosions.

Those forces would emit "ballistic projectiles" -- as small as pebbles or weighing up to several tons. The agencies also said ash clouds would rise to greater elevations, dispensing ash over wider areas.

Gov. David Ige asked President Donald Trump to issue a disaster declaration for Hawaii as a result of the ongoing earthquakes and volcano eruption, according to a press release.

The declaration allows federal funds to begin to flow to state and local efforts in Hawaii. The estimated cost to protect residents over the next 30 days is expected to exceed $2.9 million, according to the governor's office.

A brief explosion Wednesday on a Kilauea crater was the result of falling rocks and not the interaction of lava with the water table, the USGS said.

Officials have warned of dangerous levels of sulfur dioxide gas.

If winds weaken, that gas and other volcanic pollutants can settle easily with moisture and dust to create a haze called volcanic smog, or "vog," with tiny sulfuric acid droplets that can pose respiratory problems, according to the US Geological Survey.

Trade winds could weaken Thursday and Friday, meaning the vog that's largely been accumulating over the ocean south of the Big Island could pool over a larger portion of it, creating possible health hazards, the National Weather Service says.

And with high chances of rain on those days, sulfuric acid droplets would fall, creating another menace known as acid rain, CNN meteorologist Michael Guy says.

At higher concentrations, vog can cause headaches and irritation to the lungs and eyes, the University of Hawaii at Hilo says.

"Because of their small size, aerosol particles such as those in vog penetrate deep into the human lung and are readily retained," the USGS says. 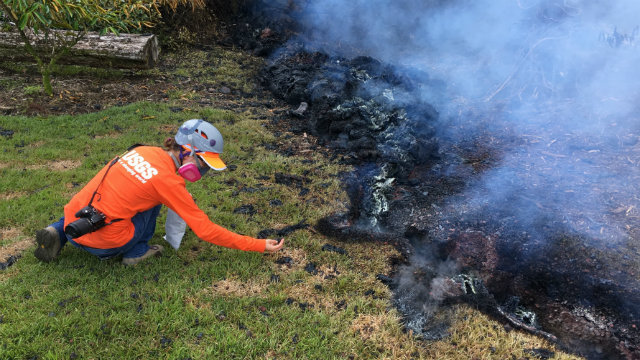 As part of their monitoring work, HVO geologists collect samples of spatter for laboratory analysis; information gained from these samples sheds light on what's happening inside Kilauea Volcano. This photo, taken Sunday morning, shows fissure 10 near the intersection of Malama and Pomaikai Streets in Leilani Estates. USGS

High levels of acidic particles in vog "can induce asthma attacks, especially in adolescents, and can also impede the ability of the upper respiratory tract to remove other potentially harmful particles," it says.

For people with asthma and other respiratory problems, "the effects are much more serious, causing a tightening of the airways in the lungs and making it very difficult to breathe," the university says.

But it adds: "There's been no clear evidence that vog causes lingering damage to normally healthy individuals."

If trade winds become lighter as predicted later this week, vog could pool northward over parts of the island by Friday, the weather service says.

But winds are forecast to return -- and the vog could be pushed off much of the island -- by Friday night, it says.

If it rains where vog has collected, acid rain would result.

"Wherever you have a vog plume, you're going to have acid rain, if it's raining," University of Hawaii meteorologist Steven Businger told CNN affiliate Hawaii News Now.

What are the effects of acid rain? The droplets of sulfuric acid in vog have the corrosive properties of diluted battery acid, the USGS says.

"When atmospheric moisture is abundant, these droplets combine with it and fall as acid rain, damaging plants and accelerating the rusting of metal objects such as cars, industrial and farm equipment, and building components," it says.

The amount of acid rain depends on the concentration of sulfur dioxide in the air, CNN's Guy says.

Determining how acid rain affects human health is complicated, and Guy says the effects on the skin are unclear.

One direct, immediate threat is not the rain, but rather breathing in the particles in the vog -- the very pollutants that caused the acid rain, according to the Environmental Protection Agency.

"Walking in acid rain, or even swimming in a lake affected by acid rain, is no more dangerous to humans than walking in normal rain or swimming in non-acidic lakes," the EPA says.

But acid rain can contaminate household water supplies by leaching metals from building and plumbing materials, the USGS says.

That includes rooftop rainwater-catchment systems that Hawaii residents use for drinking water.

"In 1988, the drinking water of nearly 40% of homes using such systems in the Kona Districts of the island was found to be contaminated with lead leached by acid rain," the USGS says. "Tests confirmed that the blood of some residents of these homes had elevated lead levels."

Businger told Hawaii News Now that acid rain is not an immediate health hazard, adding that it's "the least of their (residents) worries."

Other dangers persist, not only in the form of lava but also earthquakes and newly formed cracks.

Two additional volcanic vents -- the 13th and 14th -- erupted Tuesday in the Leilani Estates area, where roughly 1,700 residents were asked to evacuate last week. At least 36 structures -- including at least 26 homes -- have been destroyed.

On Wednesday, a 15th vent formed -- this one in the Lanipuna subdivision, the Hawaii County Civil Defense Agency says.

Residents were being still allowed to check on their properties from 7 a.m. to 6 p.m. each day but must be prepared to leave at a moment's notice, the Hawaii County Civil Defense Agency says.