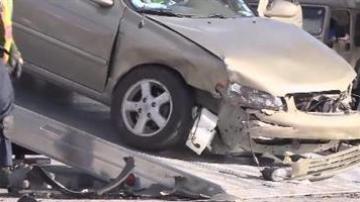 It happened at the intersection of Cleveland and Ironwood, backing up traffic past Castle Point.

Clay Township firefighters and EMTs arrived at the scene within minutes of the crash and began working on people who were hurt. Three young men were laying in the grass on the corner as first responders administered first aid. One person was taken away on a stretcher for medical treatment.

Police were at the scene directing traffic as crews towed away the cars that were smashed up and swept glass out of the street.

Officer Swanson of the St. Joseph County Police said that a gold 4-door car was heading south on Ironwood and hit a red 2-door car that was heading west on Cleveland.

He also said five people were involved in the crash and all of them were heading to Memorial Hospital to get checked out, but would not comment on the extent of their injuries.

The intersection was cleared by 6 p.m. and traffic resumed as normal.