Helping the Elkhart community one event at a time 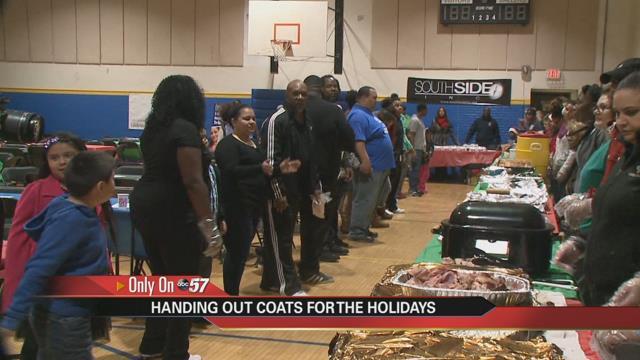 Only on ABC57 News, for the third consecutive year a local non profit putting together an event to better their community.

On Sunday, South Side Inc. and Indiana Black Expo, along with the Elkhart community, distributed free coats, warm meals and health screenings to those in need this holiday season.

People in the community say this is step one of making Elkhart a better place.

Joshlyn Dade, a first time volunteer, said the weather made her think twice about helping, but realized this is for a bigger cause.

“I just kind of felt like this would be an important event for me to be a part of. Elkhart can be positive, it’s not always negative,” said Dade.

“I think this event gives everybody a chance to more or less come together, I just enjoy this day more than anything,” said Janie Newcomb an Elkhart resident.

Nearly all of the food was donated by the people of Elkhart. With the help of about 80 volunteers they were able to serve more than 130 people.

“We don’t call this feed the homeless, we call it feed our friends, feed our families,” said Robert Taylor, President of Elkhart Indiana Black Expo and Vice President of South Side Inc.

All this while, spreading cheer with smiles and hugs.

“One thing we have to understand, no matter what race, we all need each other some type of way,” said Taylor.

Velen Santiago was there in hopes of passing down the joy of the holiday season.

“This is an example we set for our children so they can learn how to share and appreciate what’s around them,” said Santiago.

Sunday organizations put in a request to Elkhart residents and their result was overwhelming.

“There’s a lot of people that need to remember and need to be let known that they still matter,” said Lisa Ward another Elkhart resident. ?