Henry Davis Sr. to face no charges in Dieter complaint 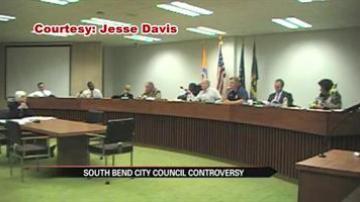 SOUTH BEND, Ind. -- The St. Joseph County Prosecutor's Office announced no charges will be filed against Henry Davis Sr. for an incident that happened during a South Bend Common Council Rules Committee meeting on June 9, 2014.

Council member Derek Dieter filed a police report against Henry Davis Sr. about his actions during the meeting that night.

The prosecutor's office says it assigned an investigator to the case. His report was then reviewed by a deputy prosecuting attorney.

After a review of the report, it was determined Davis Sr. would not be charged with intimidation or disorderly conduct.