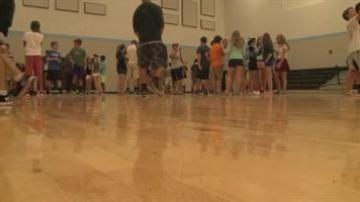 Both teams were warming up when the storms rolled in and all the students were taken into the gym.

Terrell Rice said, “I’m very disappointed, I just wanted to see a good game tonight and I couldn’t do that.”

The game was supposed to start at 7:30 p.m. and Cathedral drove all the way from Indianapolis to play.

A St. Joseph High school freshman said he was disappointed about the lightning delays.

Owen Catanzarite said, “The rain started coming and I went into the tunnel and we went into the school and then they took us into the gym. They’re not letting us go out so it’s kind of boring being in here.”

Several students tried to make the best of the situation by playing football inside.

One cheerleader said this would have been her first game as a freshman.

Lauren Peterson said, “It’s so disappointing because we put so much work into it. And we were really pumped up for the game because we were so spirited and everything when we were getting ready."