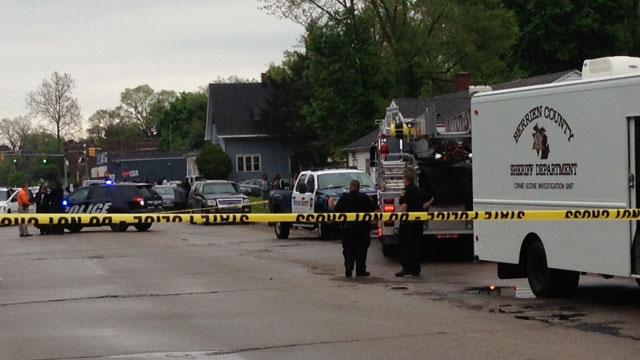 The body of 18-year-old Grady Manns was found near the intersection of McAllister and Empire avenues.

Berrien County dispatch says they received a call around 7:15 a.m. from a bus driver.

"At 7:15 a bus driver saw the body of the man lying there, called 911. We responded," said Michael Clark, Deputy Director of the Benton Harbor Department of Public Safety.

Investigators believe Manns' body could have been there for more than ten hours.

Manns was a junior at BHHS. Classes were dismissed early because of his death.

Friends say both students and staff were too distraught to stay in class.

"One of the things we have to keep saying to the community at large and parents and leaders is that we have to come together and find a way to stop the violence," said Pastor Maurice McAfee.

Friends say Manns was a father to a baby.

After Manns' body was found Thursday morning, a large crowd gathered in the area.

While at the scene consoling students, Benton Harbor High School principal Rodger Triplett said "They are killing my kids."

Manns was the second teen in Benton Harbor High School student to be murdered in the last several months.

Police say no one is in custody for Manns' murder, but they are questioning some individuals.

Berrien RESA released this statement about how the district is helping students:

The Benton Harbor Area Schools family experienced a terrible tragedy this morning. To aid both our students and staff in their grief, the Board of Education along with our Administrative Team invited the Berrien RESA Crisis Team to the High School to provide support.  The Crisis Team along with BHAS counselors are currently working to ensure that all students and staff members have access to counseling services, both today and tomorrow.  Additionally, the district's superintendent and administrative team were onsite to provide support.