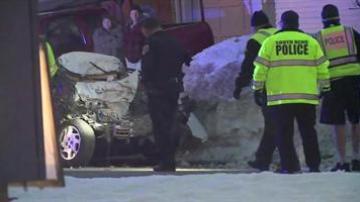 SOUTH BEND, Ind. -- A high speed chase ended Monday night when the suspect struck a pedestrian and crashed his Cadillac.

The suspect went airborne before he hit the pedestrian.

The high speed chase started just after 5:30 p.m. when a South Bend Police Officer tried to pull over a red Cadillac that had a fake license plate on it. Then the suspect took off.

The chase started at Fellows Street and Woodside. The suspect headed toward Michigan Street.

In the process the suspect struck around a dozen vehicles and went through several stop signs.

“We are very fortunate that the subject did not hit more people or pedestrians. I do know that a few pedestrians had to jump out of the way to avoid getting hit,” said Mishawaka Police Lt. Tim Williams.

The injured pedestrian was identified as 40-year-old Lucky Weah of South Bend.

Weah is in good condition.

St. Joseph County Police are looking for any witnesses to contact Captain Tim Spencer or Sergeant Scott Parker at 574-259-2966.