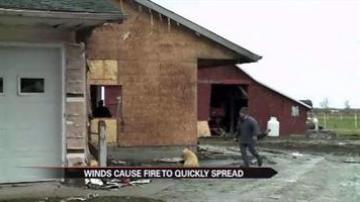 According to the Topeka Fire Department, they were dispatched to 8285 West 600 South Topeka for a fully involved barn fire at 9:03 p.m. Monday.

"We were fighting a losing battle with those winds," said Topeka Police Chief Stewart Bender.

Bender said they knew the winds would be a problem for any fire.

"Kind of had a game plan already, that if something happens, even a simple house fire, it's probably going to take more than a normal response to deal with," said Bender.

Three other barns and another house on the property were undamaged.

The barn was a total loss.

Fire crews were back in service around 2:30 a.m. Tuesday.

The cause of the fire is undetermined.