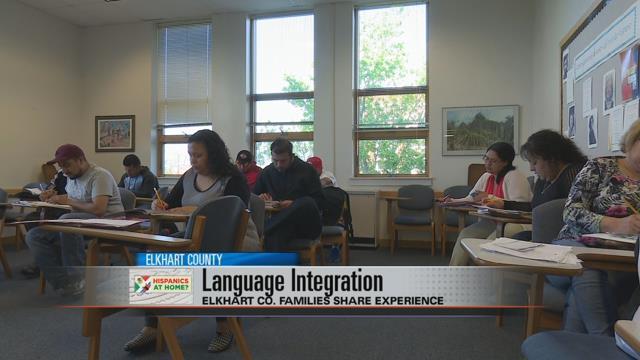 Latinos are making a mark on Elkhart County after a majority of their population growth happened in the 1990’s.

According to the 2015 American Community Survey 11.9% of the population in Elkhart County speaks Spanish.

In Elkhart County there are Latino families with as many as three generations.

Similar to previous immigrant groups by the second generation a majority can speak English.

I talked to Latinos of different generations who have their own experience with Spanish here in Elkhart County.

Games, drawings, and actions are all used to learn a second language in an English class in.

“I do see that people want to get educated and advance at their jobs and with their kids in school,” says Rocio Diaz with Goshen College.

Diaz says this is the second year the class is being offered.

The 12 week course is full with 55 students and another 50 on the wait list.

“More English is more opportunities obviously more money and I want a better life for my kids,” says David Poppi, of Goshen.

David has been in the United States for 14 years and took English classes in Peru where he is from.

“I just need more practice and talking to somebody who only speaks English has helped me a lot,” says David.

David works full time in computer programming and says he has given up time from work to attend these classes.

“What is more important for your life English more opportunities or you work a lot of overtime and you are stuck in that job forever,” says Poppi.

In Elkhart County the number of people born outside of the United States is about 8%.

David is in that demographic; he is first generation but says he has not had issues communicating in his community.

David’s other goal, is to preserve his culture. He says in his home it’s only Spanish so that his children will be able to speak two languages

“My dad said to me if you know two languages then you get like an improvement,” says George Vazquez of Elkhart.

George is 10 years-old and is a second generation Latino who lives and was born in Elkhart. His parents are from Mexico.

ABC57’s Andreina Centlivre asks George in Spanish where he learned to speak Spanish?

George responded in Spanish that his mom and dad taught him, and that they have taught him a lot.

His ability to switch from English to Spanish and being born in the United States allows him to dream big.

“I do want to go to college and I want to be a scientist and my one like big dream is being a president,” says George.

George’s mom encourages her son to excel in both languages.

This is an attitude third generation Latino Jason Moreno wishes would have been pushed in his household.

“Today in my work I’m unable to communicate effectively with a good portion of the population of the city that I work with,” says Jason.

Jason works with the South Side neighborhood of Elkhart.

He lives there too with a growing number of Spanish speaking businesses surrounding his home.

“They started talking to me in Spanish and then they were confused as to why I wasn’t speaking Spanish,” says Jason.

Jason grew up in Elkhart.

His grandparents moved from Mexico to the south during a time when segregation was common.

Because of racism they raised Jason’s dad to hide their culture.

“They didn’t speak any Spanish in the home and they gave him an Anglo name,” says Jason.

Jason’s reasons for not speaking Spanish are unique to him, but his circumstance may be the new norm.

Jason says he feels for these adults who are hitting the English grammar books.

He too knows what it’s like to study a new language.

“I Failed Spanish one three times and then I quit. You just don’t take to it very well as an adult or as a late teen as you would as a child it’s just tricker,” says Jason.