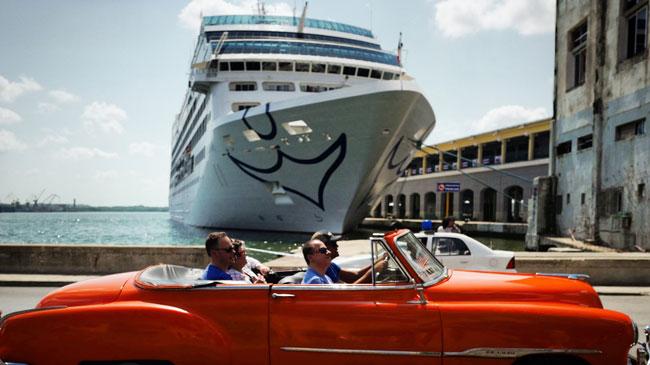 HAVANA (CNN) -- The first cruise in decades to travel from the United States to Cuba docked in Havana Monday.

The Adonia's arrival in Havana marks the first stop on a historic, seven-day voyage that signals closer ties between the United States and its communist-run neighbor.

The boat set sail from Miami on Sunday as salsa music played and protesters picketed nearby.

Standing beside Cuban and American flags, the cruise manager touted the journey as "the beginning of a new era."

Not everyone was happy about the new route.

A small group of protesters gathered outside the port Sunday. And as the cruise ship was getting ready to leave Miami, police descended upon a nearby boat labeled Democracia, where demonstrators held a blue sign that said, "Castro why do you ask Cubans for a Visa to visit their own country?"

The demonstrators didn't stop the cruise ship from pulling out of the port.

Putting politics behind as ship heads toward Havana

About 700 passengers are aboard the ship, operated by Carnival Corp.'s Fathom cruise line.

Some of those passengers said they don't want politics to interfere with the historic occasion.

As she waited to board, Pam Carlson said she wanted to put politics behind and travel to Cuba for the people.

"My grandmother went way back in the day, before it was ever closed, so just to be able to go there and meet the people and see the people, it will be meaningful to us," she said.

Gary Carlson said that, to him, the controversy surrounding the cruise doesn't add up.

"I'm not sure I really understand, because it's time to put those things behind us," he said. "Really the big issue is government to government, not people to people, and that's what we're excited about participating in."

The seven-day cruise is scheduled to stop in three cities: Havana, Cienfuegos and Santiago de Cuba.

As the boat sailed, a salsa band serenaded passengers on deck.

Jesse Mercado, a business owner from Los Angeles, was one of the first to hit the dance floor with his girlfriend, putting aside the small American and Cuban flags they had been waving at people on the shore as the ship passed by Miami's South Beach.

He said he was looking forward to buying some of the island's famed cigars, but he most likely wouldn't try to bring them back to the United States, where an embargo on Cuban-made products still exists.

"I'll probably smoke them all there (in Cuba)," he laughed.

Retiree Carl Harbour sat watching fellow passengers dance to the music as the boat left Miami, looking on as others posted selfies. When asked what he most anticipated about arriving in Cuba, he smiled and said he, too, was looking forward to a cigar.

"When I got old enough I acquired a taste for Cuban cigars so I have come to appreciate Castro trying to help the common people all these years," he said.

"I don't think he is one of these dictators who keeps his money stocked away in some Swiss bank account. I think he really wanted to help the people and improve the life of the common people of Cuba."

Last month, controversy erupted over a Cuban law that prevented Cuban-born passengers from coming to the island on boats. The law stopped Fathom owner Carnival Corp. from selling tickets to Cuban passengers.

That move sparked a lawsuit from would-be Cuban passengers and an announcement by the cruise line that it wouldn't sail unless Cuba changed its policies. Soon afterward, the Cuban government said it would scrap its longstanding ban on letting people born in Cuba come to the island by cruise ship.

However, the two plaintiffs, Cuban-born Americans Amparo Sanchez and Francisco Marty, were not on board the ship, said their attorney, Javier Lopez, "not because they don't want to be but because the Cuban government requires people that were born in Cuba to jump through a whole bunch of other hurdles."

He explained that the couple would have had to go to the Cuban Embassy in Washington, which opened last year, and "get the most expensive passport in the world.

Cruise officials said six of the passengers on the cruise are Cuban.

Beatriz Melendez is one of them.

The 52-year-old was 4 when she left Cuba with her sister and parents. Now she and her sister are taking the cruise to Cuba together.

As the cruise ship left Miami, the sisters spotted a rainbow spanning the bright blue sky -- a sign that the spirit of their parents is with them, Melendez said, as they begin their journey back home.