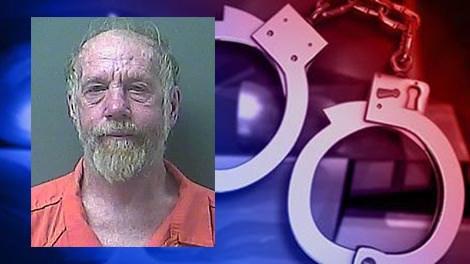 A La Porte homeowner detained a man who was allegedly trying to enter his home through a window Saturday evening.

According to La Porte Police, they were called to 608 Bond Street around 10:50 p.m. Saturday for reports of an attempted break-in.

When police arrived, they say David Eversman was lying face down on the ground in the yard. He smelled of alcohol and his belt and jeans were undone and hanging below his waist.

The female resident told police she was outside taking her dog for a walk when she saw Eversman outside near the bedroom window. She asked him what he was doing and he replied, "Nothing."

She called for her husband and he came outside.

He said then he heard his wife scream someone was trying to get in through the window.

The husband opened the window and jumped out it to subdue Eversman outside, reports said.

Police said there was visible damage to the window screen.

The couple's four children were home at the time of the incident.

Eversman, 62, was arrested and charged with attempted residential entry and public intoxication.

Eversman is being held at the La Porte County Jail on a $750 cash bond.