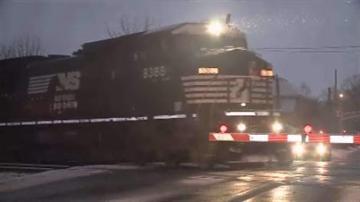 ELKHART, Ind. -- Since 2010, the city of Elkhart has been moving forward with plans to widen Prairie Street  and build a bridge where the train cuts across the road in order to reduce traffic.

The Norfolk Southern Railroad Line that intersects Prairie Street between Middlebury and Main Streets is a very busy one. People who live in the area say a train goes by just about every ten minutes.

And every time a train goes by, traffic comes to a halt.

For this reason, some people say they look forward to the day that the overpass is built.

But there are others who are not as excited about this project.

Homeowners near where Main meets Prairie, say the city has plans to demolish several homes and convenience stores in the area, places where people still live and work.

Some businesses and residents have already accepted deals and signed over their property.

Maria Corona says her family has lived in their home for twenty years, and she feels hurt; like they didn't have a choice.

Construction is set to begin in 2014 but some homeowners say there is a great deal of uncertainty when it comes to this project.

They say it has been hard to get direct answers from the city.