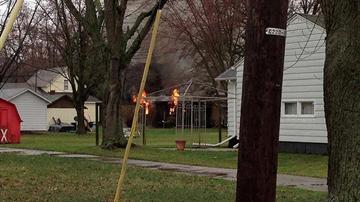 CASS COUNTY, Mich. – A strong string of storms packed with thunder and lighting is being blamed for a house fire in Dowagiac Wednesday morning.

The fire started around 11 a.m. at a house on Division Street, also known as M-62.

Neighbors say they heard a large boom and a crackle – and the next thing they knew, they smelled smoke.

"I heard a big boom and I thought someone got hit by lightning and then I started smelling smoke," said Ron King.

Neighbors say the lightning struck on top of the roof where there is now a visible hole.

By the time Captain Mike Mattix and the Dowagiac Fire Department pulled up, smoke was rolling out of the home.

"Crews arrived on the scene to find smoke coming from the eaves,” said Mattix.

Because the house is on M62, traffic had to be rerouted.

“It’s one of the major thoroughfares through the city of Dowagiac,” said Dowagiac Police Patrolman Jim Kusa.

They called in 4 additional fire departments to help fight the fire.

"It's an older home with a lot of hidden spaces and the homeowners have a lot of debris in the house,” said Mattix.

Mattix says everyone got out of the house okay.

“One gentleman and his dog were in the home. They got out safely,” said Mattix.

Firefighters battled the blaze for hours to prevent it from spreading to nearby homes.

“We are trying our hardest. It got a head start on us and a lot of times with these older frame homes fire can travel really quick,” said Mattix.