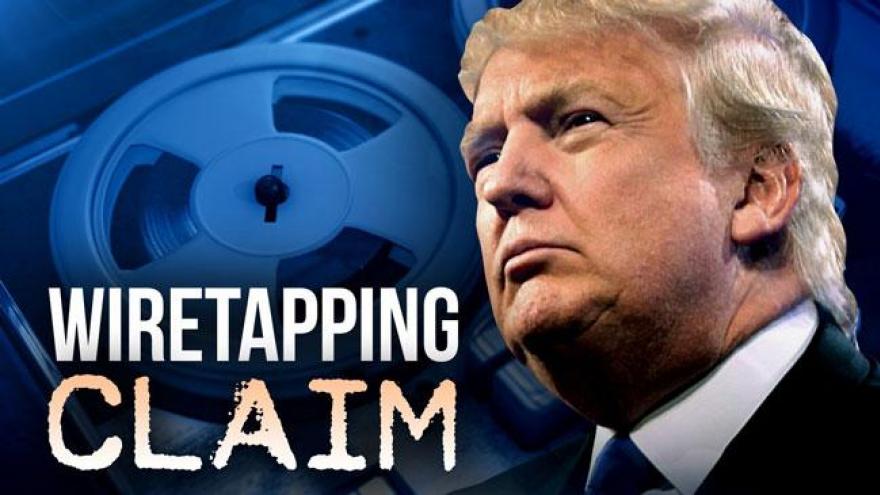 (CNN) -- House Intelligence Committee Chairman Devin Nunes said Wednesday that neither he nor the ranking Democrat on the committee have seen any evidence that then-President Barack Obama wiretapped Donald Trump last year, and want the Justice Department to respond to their requests for information by March 20.

"We don't have any evidence that that took place and in fact I don't believe -- just in the last week of time, the people we've talked to -- I don't think there was an actual tap of Trump Tower," Nunes said at a news conference, in reference to the baseless claim originally made by Trump several weeks ago.

FBI Director James Comey will testify at their March 20 hearing and that there will be a second hearing in the committee March 28.

Two senators on a key Senate Judiciary subcommittee are at odds over whether Comey privately assured them that he would confirm by Wednesday whether there's a criminal investigation into Trump campaign ties to Russia.

Sen. Sheldon Whitehouse said Comey privately told him and Sen. Lindsey Graham that he would let them know by their Wednesday afternoon hearing on Russia whether there's an active probe into the matter.

"Yes, he said he will have an answer for us by the hearing" Wednesday, the Rhode Island Democrat told CNN Tuesday.

But Graham disputed Whitehouse's claim Wednesday telling CNN's Kate Bolduan that the FBI director made no assurances to make the March 15 deadline.

Asked if he thought he'd get an answer by Wednesday, the South Carolina Republican responded, "I have no idea."

When asked about Graham's comments Wednesday, Whitehouse stood by his initial remarks.

According to an FBI official, Comey has no plans for any public comments or announcements Wednesday.

Whitehouse said Comey made the promise in a March 2 meeting with him and Graham. Whether Comey gives them the information they're seeking, both Graham and Whitehouse are insisting they need answers from the FBI.

Whitehouse and Graham both asked the Justice Department last week to provide any evidence that would support Trump's claims that former President Barack Obama wiretapped Trump Tower. The two are leading one of three Congressional investigations into Russia's interference in the US elections.

"We wrote a letter -- Sen. Whitehouse and myself -- wanting to know if there's evidence of a warrant issued by the Trump campaign," Graham told CNN's Chris Cuomo on "New Day. "He hasn't answered that letter or confirmed if there's a real investigation of the Trump campaign."

"He needs to answer the letter and give the nation some information about what's going on here," Graham said.

According to Whitehouse, Comey assured them he would confirm if an investigation exists "and the scope of their Russia/Trump investigation because he had not been able to at that point say that there was one."

Graham expressed frustration Tuesday that the Trump administration has not yet provided any evidence of wiretapping and said he plans go "tough" on the administration during Wednesday's hearing.

The White House has vacillated on Trump's claims in the last two days. Press Secretary Sean Spicer said Monday that Trump did not mean literally that Obama had him wiretapped. But on Tuesday, Spicer said Trump was "extremely confident" he would be vindicated by the evidence.

"He feels very confident that what will ultimately come of this will vindicate him," Spicer said.

Democrats from the Senate Intelligence Committee -- whose investigation is separate from the one Graham and Whitehouse are a part of with the Subcommittee on Crime and Terrorism of the Senate Judiciary Committee -- said Tuesday they doubt Trump has evidence he was wiretapped, but the issue could easily be settled.

"It can all be put to bed with one phone call," said Sen. Mark Warner, the top Democrat on the Senate Intelligence Committee, before heading into a hearing of the group Tuesday afternoon. "I have seen absolutely no evidence of President Trump's claim about President Obama."

Warner said he expects the first public hearing from the Senate Intelligence Committee on Russia later this month. The Virginia Democrat said he wanted to hear from Roger Stone, a former Trump adviser whose contact with "Guccifer 2.0"-- the online persona who claims responsibility for hacking the Democratic National Committee -- also had Sen. John McCain wanting to question him.

"If we are investigating Russian interference, here is someone who has acknowledged that he has been in contact with the Russians," Warner said of Stone.

Stone has described his contact with Guccifer as limited to a "brief exchange with him on Twitter" and any suggestion otherwise, he told CNN, is "a fabrication."

The House Intelligence Committee scheduled its first hearing for Monday, and has invited a slate of current and former intelligence chiefs to testify.

Senate Intelligence Committee Chairman Richard Burr said Monday that he has asked the "appropriate people" for information about Trump's wiretap claims and said their answers have been "sufficient."

But Senate Democrats on the Intelligence Committee said they have not seen any evidence yet.

"I've heard nothing. But I'm strongly of the opinion there was no wiretapping," said Sen. Dianne Feinstein, a veteran member of the panel.

Warner also said he was not satisfied with the response to requests for information from the administration, saying, "I'm not sure why this is taking any time."