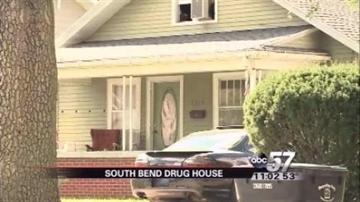 SOUTH BEND, Ind.-- A posted warning on a South Bend house confirmed what neighbors say they already knew. A house on Longfellow was a hot spot for drugs. The police warning states the property is contaminated with illegal drug materials.

Drugs. They are the last thing you would think you would find in the quiet neighborhood of Sunnymede that many call a "Leave it to Beaver" kind of place.

“Many homeowners here have been in the neighborhood for, in some cases, 30, 40, 50 years,” Sunnymede Neighborhood Association President Ron Silverman.

But residents say thanks to their neighbors who moved in a couple of years ago, drugs are now a problem.

“A drug house brings a unsavory element into our neighborhood,” Silverman said.

Police even put a notice on the door of the house Tuesday. It warns of hazardous materials on the property used to make drugs. Neighbors said they are confused as to why people are still living there.

“My concern, obviously, is that we have that kind of element, a crack-house if you will, within our neighborhood,” Silverman said.

ABC 57 knocked on the door of the house but got no response.

Silverman said if the residents there do move out, he can only hope that drug-free property owners will move in.

“Hopefully the property owner, whoever that person might be will be more responsible in both maintaining the house and who they lease the house out to,” Silverman said.