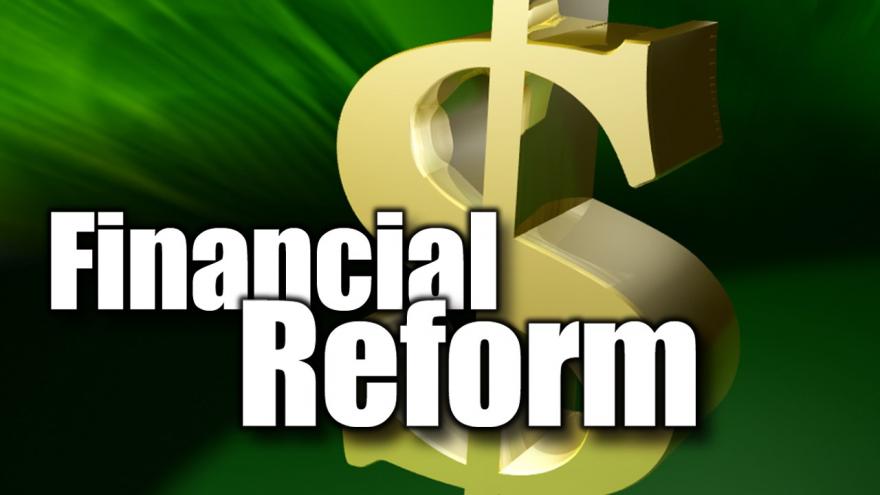 WASHINGTON (CNNMoney) -- House lawmakers are poised to pass the "crown jewel" of the GOP-led regulatory reform effort on Thursday, effectively gutting the Dodd-Frank financial regulations that were put in place during the Obama administration.

Crafted by House Financial Services Chairman Jeb Hensarling, the bill is expected to pass despite vehement objections by Democrats to preserve the sweeping law aimed at preventing another financial crisis and protecting American consumers. For any bill to pass in the House, it requires at least 218 votes.

"I will go out on a limb and say that I believe it's going to pass today," Hensarling told reporters at an event at the conservative Heritage Foundation Thursday. "It will be the culmination of a lot of good work by a lot of good people."

Republicans criticize the Dodd-Frank regulations as the primary driver for anemic economic growth in the U.S. and for enshrining too-big-to-fail, which they say paves the way for future taxpayer bailouts of the country's biggest banks.

"We see the Financial Choice Act as the crown jewel of this effort," Ryan said at a press conference. "The Dodd-Frank Act has had a lot of bad consequences for our economy, but most of all in the small communities across our country."

Hensarling's bill would give the president the power to fire the heads of the Consumer Financial Protection Bureau, a consumer watchdog agency created under Dodd-Frank, and the Federal Housing Finance Agency, which oversees mortgage giants Fannie Mae and Freddie Mac, at any time for any -- or no -- reason.

It also gives Congress purview over the CFPB's budget, meaning lawmakers could defund the agency entirely.

The GOP proposal would also bar the Federal Deposit Insurance Corp. from overseeing the so-called living will process, which requires banks to write up plans on how they would safely be unwound in the event of a collapse. The FDIC and the Fed are the two regulators responsible for overseeing this requirement under the 2010 law.

Democrats objected to the bill calling it the "Wrong Choice Act." They say it would return the country to the "regulatory Stone Age" and be a disaster for the U.S. financial system.

In an editorial posted on Medium this week, Maxine Waters, the top Democrat on the House panel, said "Donald Trump and Republicans want to go back to the bad old days and lead all of us down the road to another financial crisis."

Should the House bill pass, its destiny will be in the hands of the Senate.

Senate Republicans will likely seek to craft their own companion measure to overhaul the Dodd-Frank regulations.

Led by chairman Mike Crapo, the GOP senators say they want to take a bipartisan approach to creating a regulatory relief bill for Wall Street and community banks. Crapo has been working closely with his counterpart Sherrod Brown, a top Democrat on the panel, to find common ground.

"Democrats have shown we're willing to work with Republicans to tailor the rules where it makes sense, but not if it means killing the reforms that have made the financial system safer and fairer," Brown said in a statement.

On Thursday, Hensarling said he regularly speaks with Crapo, who he said has "encouraged" him to pass the bill.

"I still think he has high hopes of putting together a companion legislation," said Hensarling. "What a package would look like I don't necessarily know," he said, referring questions to Crapo.

Crapo has vowed to work with all stakeholders, including the Trump White House and regulators, "to strike a balance" in achieving smart regulation that spurs the U.S. economy.

The Idaho Republican has set his own target of early 2018 to pass major bank reform legislation.

Unlike the House, Republicans will need to sway at least eight Democrats to pass a regulatory reform bill to cross the 60-vote threshold. GOP senators currently hold 52 seats in the Senate.

Those who closely follow the debate believe there's no chance Hensarling's bill would pass the Senate as is. Rather, they expect the upper chamber to advance a separate regulatory relief bill of their own.

"We continue to see no path forward for this legislation in the Senate," said Jaret Seiberg, an analyst with Cowen & Co., in a note to clients ahead of the House vote.

They could try to pass a regulatory relief bill through reconciliation, which only requires a 50-vote majority to pass the Senate. That would likely mean a smaller number of limited changes to the Dodd-Frank Act rather than a major single legislative package.

Or they could leave the 2010 regulatory reform law intact and put the onus on regulators, like the Federal Reserve and the Federal Deposit Insurance Corp., to rewrite some of the rules.

"Much of the language in Dodd-Frank is vague and gives a lot of discretion to regulators on how they write the rules so, over time, I expect the Trump administration will amend some of the Dodd-Frank rules," said Brian Gardner, a policy analyst with Keefe, Bruyette & Woods, in a podcast.

Any changes to the Dodd-Frank regulations, however, require the approval of those in top regulatory posts at three bank regulatory agencies -- the Fed, the FDIC and the Comptroller of the Currency -- several of which the president has yet to nominate. Trump has yet to fill three open slots on the Fed board, including a new regulatory czar.

On Monday evening, the president tapped Joseph Otting, a former colleague of Treasury Secretary Steven Mnuchin at OneWest to run the Office of the Comptroller of the Currency. He will oversee more than 1,000 lenders, including big Wall Street banks. His position still requires Senate approval.

The spotlight on the financial reform this week could "convince the White House that it's time to act on these key nominations," said Seiberg.