How a donor recognition program will impact the Indiana Dunes 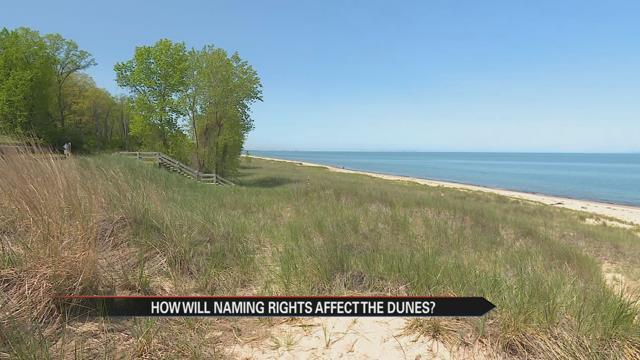 The National Park Service is starting a donor recognition program, but how will it impact the Indiana Dunes?

An article recently published in The Washington Post raised some eyebrows with the headline, “Yosemite, sponsored by Starbucks? National Parks to start selling some naming rights.”

So, we wondered what this means Michiana’s own national park.

Labovitz, who oversees the 15,000 acres of coastal Indiana that millions of people come to enjoy each year, said the recognition program will not change much.

“How donors are recognized will be very, very carefully controlled and very subtle and subdued,” Labovitz said.

The proposed guidelines, outlined in this 33-page document, would allow national parks to recognize private and corporate donors in a way that would, “not compete for attention with, or draw attention away from, the park’s purpose.”

“We wouldn’t name the building something, but we might name the room [inside] after a corporate donor,” Labovitz said while standing outside one of the park’s pavilions.

You might see small plaques on picnic areas or a donor wall inside a visitor center, but nothing that gets in the way.

The idea is to honor donors and possibly influence more to come help.

“We are looking in the sofa cushions for every nickel we can find to do a variety of things that we would like to do,” Labovitz said.

Our nation’s 411 national parks have a maintenance backlog of more than $11 billion, and at the Dunes, that figure stands at roughly $27 million, according to Labovitz.

Batistatos is the chairman of the Dunes National Park Association, the official advocacy and fundraising arm for the Indiana Dunes.

“You’re not going to drive in and see huge, bold neon lights [that read], ‘Welcome to the Target National Park,’” he said. “That’s simply not going to happen.”

Batistatos said his organization supports the recognition program, and he hopes it will bring in more donations for the park that his team will oversee.

“We care about our resources,” Batistatos said. “We care about what we’re charged with. And we’re gonna make good decisions for the people who use our park system.”

“I don’t have a problem with it at all,” Ogden Dunes resident David Hiduke said. “As long as they’re not putting the golden arches over the restrooms, I think we’re good.”

“We will control how things look,” he said. “We will not be handed some package from the corporate marketing folks saying, ‘This is how our name needs to appear on your facility if we support this.’”

For park lovers like Holloway, any opportunity to help the Dunes is welcome.

Labovitz said the national parks have received money from businesses and private donors for decades – this would just be the first recognition program to honor them, and naming rights would not be available.

The 33-page document is currently under review and will be finalized and signed later this year.

The only places an actual logo from a corporate donor could be displayed are on a park service car, if the donor funded the purchase of the vehicle, or on things like pamphlets or websites. Any donor recognition on park grounds, besides park service vehicles, would be small, unobtrusive lettering that each park designs to assure uniformity and simplicity.

You can review additional stipulations and guidelines on pages 31-33 in the document.