How local Senators voted for the Federal spending bill 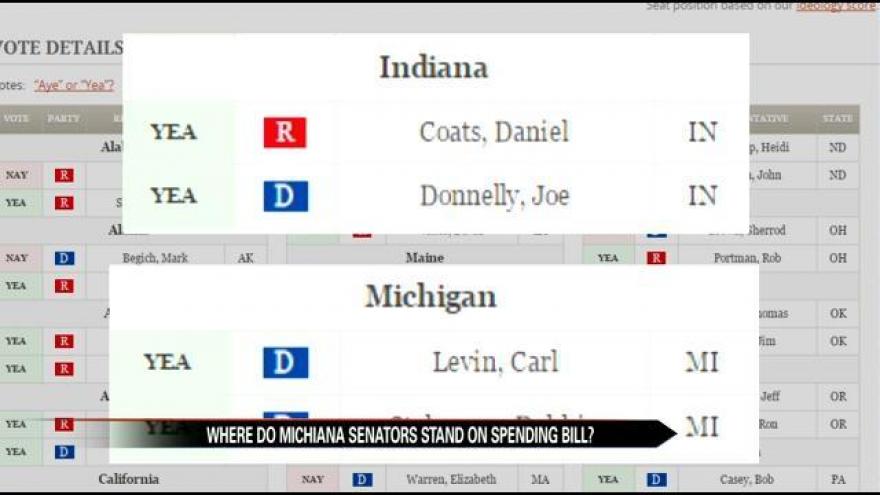 WASHINGTON, D.C. -- After a dramatic night on Capitol Hill, the House passed a $1.1 trillion spending bill to avoid another government shut down. The bill passed with a 219-206 vote.

Indiana and Michigan Senators are quiet on Friday morning on both social media and their websites.

The two main points of contention were on immigration spending and the appropriations of money to Wall Street.

Democrats and Republicans were at odds on how to reverse President Obama's Executive Action on immigration and whether taxpayers should be on the line for big companies.

When it comes to the issue on whether this 1603 page spending bill is a bail out for Wall Street, Speaker of the House John Boehner says, not at all.

"I don't believe that to be the case at all. And Democrats have supported this provision in the past. It was agreed to, in this bill, on a bipartisan, bicameral agreement," says Boehner.

As this bill heads back to the Senate for a final vote, the question remains if our local Senators will vote the same way as they did in September.

Republicans are pushing for this bill to happen meaning, Democrats could be the reason for this year's shut down if it doesn't pass.

White House officials say, they're working with Federal agencies to prepare for a shut down just in cast this bill does not go through.

The Senate was also given a two-day extension but they could vote on the bill as early as Friday evening.