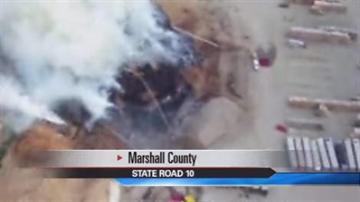 ARGOS, Ind. -- Argos firefighters had to call in reinforcements from six different fire departments, after a huge mulch pile caught on fire at North Central Pallets company on County Road 10.

The large mulch fire started around 1:30 p.m. at North Central Pallets Company. The Argos Assistant Fire Chief says the smoke could be seen from miles away.

“We were coming south on 31 and you could actually see it from Rochester, the cloud of smoke,” said Argos Assistant Fire Chief Doug Middleton.

This huge mulch fire was not easy to put out, especially in the heat.

“They are keeping guys hydrated. They are running water,” said Middleton.

Not to mention the closest fire hydrant was a little bit of a hike.

“We had to truck water in about a four mile round trip,” said Middleton.

The nearby railroad was shut down.

“The railroad inspector came out and checked out the tracks to make sure no issues were there,” said Middleton.

After five hours, firefighters finally put out the fire.

Crews were not able to salvage much of the companies’ mulch.

Middleton says he is glad his crews were able to knock down the fire before it got any worse.

“With the woods over there, it could have spread,” said Middleton.

This is not the first time there has been a fire at the pallet company. The assistant chief told me he and his crew have been called out four other times since the beginning of the year for mulch fires.