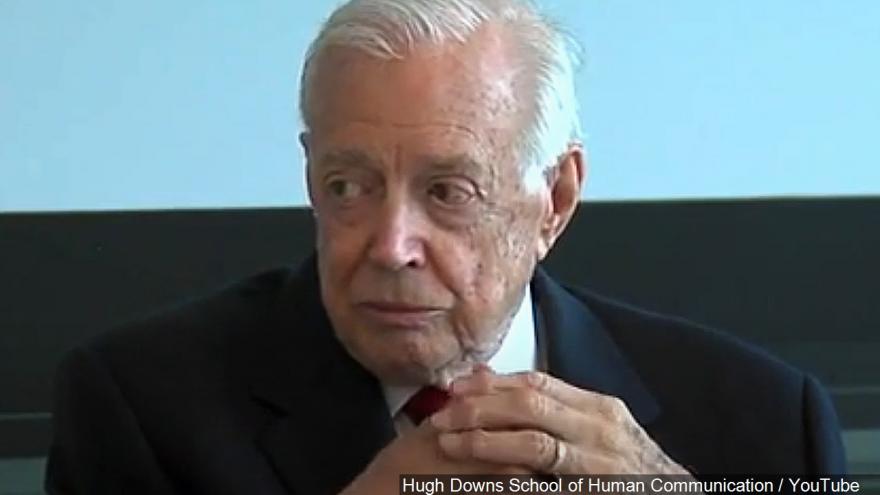 (CNN) -- Hugh Downs, the versatile and Emmy-winning broadcaster whose decades-long TV career ranged from anchoring ABC News' "20/20" to the "Today" show to serving as Jack Paar's sidekick on "The Tonight Show," has died at his home in Scottsdale, Arizona. He was 99.

Local outlet AZFamily was first to report the news of Downs' passing, citing a statement from his great-niece, Molly Shaheen.

Downs -- who retired in 1999 -- was essentially there for the very start of commercial television, serving as the announcer for the children's show "Kukla, Fran and Ollie" and comedy legend Sid Caesar's "Caesar's Hour" in the 1950s.

In 1957, when Paar succeeded Steve Allen as host of "The Tonight Show," Downs became the announcer. The next year, Downs launched his run as the original host of the game show "Concentration."

When Paar left "The Tonight Show" in 1962, Downs -- who had frequently substituted for Paar -- thought he might be asked to replace him. Instead, the network hired Johnny Carson and Downs segued to NBC's "Today," where he spent nearly a decade on the morning program.

At "Today," Downs famously championed the career of Barbara Walters, advocating that the young writer-producer be given an opportunity on camera. The two later teamed up on a syndicated program in the 1970s, "Not for Women Only," before they were later reunited on "20/20."

Downs was not involved with the development and launch of "20/20" in 1978, recalling in an interview with the Television Academy's Archives of American Television that the premiere was "hideously disastrous" and pummeled by critics. After the first episode, ABC News president Roone Arledge asked Downs to take over as an anchor to fix the show. Downs said that he had wanted to do a show like "60 Minutes," and the opportunity "fell out of the sky on me."

"'60 Minutes' created the atmosphere that allowed us to flourish as a competing newsmagazine," Downs said. Walters joined the program the year after its debut and became Downs' co-host in 1984. Downs -- with his baritone voice and soothing manner -- remained with the program until his retirement.

Downs won a pair of Emmy awards, for the program "Live From Lincoln Center" and hosting the PBS talk program "Over Easy," which premiered in 1977 and was aimed at older viewers.

Born in Akron, Ohio, Downs began working in radio after college -- a stint interrupted by his service during World War II -- before landing at NBC-owned WMAQ in Chicago, where he worked in various capacities for several years before moving to New York.

Guinness World Records once recognized Downs for having appeared in more hours of U.S. television (roughly 10,000) than anyone else, a record later broken by Regis Philbin.