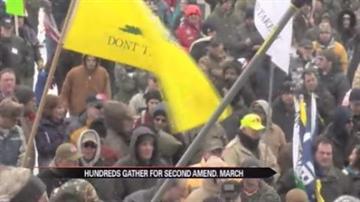 Wednesday, men, women and children waved flags and held up signs to try and remind lawmakers of their right to bear arms.

The crowd moved down Michigan Avenue in Lansing.

One protestor says the original meaning of the Second Amendment is lost in the new laws.

"The 2nd amendment isn't about hunting, if you didn't hunt when they wrote the amendment you didn't eat, it's about governments, tyranny, invasion," said Paul Wolfe, protester.

Gun owners want lawmakers to know that new gun legislation will not get passed without hearing their opinions first.