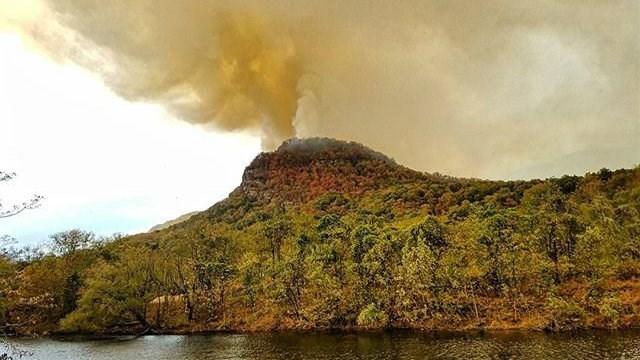 (CNN) -- More than 200 people have been hospitalized with breathing difficulties in Tennessee as wildfires scorched the Southeast.

Over 30 large fires have burned more than 80,000 acres in North Carolina, South Carolina, Georgia, Tennessee, Alabama and Kentucky, according to the US Forest Service.

"Dry weather, high winds and the continuing drought is driving the large growth of fires," Dave Martin of the US Forest Service's Southern Region said earlier this week. And because the fires are spread over several states, agencies' resources are being depleted, he added.

In Chattanooga, Tennessee, about 250 residents have been hospitalized since November 1 with shortness of breath and other respiratory issues, according to the state's Emergency Management Agency. More than half have gotten treatment since Friday, as residents struggled with heavy smoke and poor air quality.

Emergency workers in Tennessee have been trying to contain 67 fires burning nearly 16,000 acres. At least 15 new fires flared up Tuesday, according to the agency.

The fires prompted Tennessee Gov. Bill Haslam to issue a ban on open-air burning in over half the state's counties.

This isn't just an issue for those living close to wildfires, as winds have carried the smoke to cities miles away.

In Atlanta, where there are no wildfires, the air quality level was "unhealthy." That means "everyone may begin to experience health effects and members of sensitive groups may experience more serious health effects," according to the National Weather Service.

Pockets of wildfires burned in some parts of Northern Georgia.

The Rough Ridge Fire in the northwest area of the state is the biggest fire in Georgia. It has engulfed more than 21,533 acres and was 20% contained as of Tuesday, according to the US Forest Service.

In response to the exceptionally dry conditions in Georgia, North Carolina, Tennessee and southern Virginia, the Appalachian Trail Conservancy and National Park Service placed fire restrictions along the southern portion of the Appalachian National Scenic Trail on Wednesday.

While the fires continue to burn, there is little rain in the forecast.

Some school systems, like Greenville County in South Carolina and Haywood County in North Carolina, are limiting outdoor physical activity. Students with respiratory conditions, those wishing to remain indoors during recess and athletes who usually practice outdoors are allowed to remain inside.