Hundreds in St. Joseph County without power after man crashes into utility pole 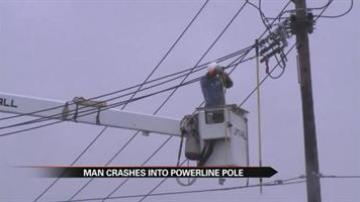 Police blocked off Day Road at the intersection of Home Street because several of the lines were still active.

Christopher Barnes was on his way to work when he wrecked into a utility pole and the power lines came crashing down around him.

“I wasn’t going fast when I hit, it just splintered,” said Barnes.

He says it’s a miracle that he didn’t get trapped in the active power lines.

“I got out and ran. I saw power lines around and I wasn’t gonna play,” said Barnes.

He says his truck's brakes went out when he was coming up to the stop sign.

“I was coming up to the stop sign and my brakes hit the floor and I did everything I could to avoid the accident,” Barnes said.

Both AEP and Mishawaka Utilities were working hard in the pouring rain this morning to get people's power back on.

Barnes says he was shocked that the pole fell down when he hit it.

“My truck’s not even that damaged it must have been an old utility pole or something,” Barnes said.