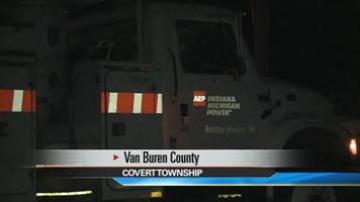 COVERT, MI. -- Hundreds of people are without power in Covert Township, Michigan. And that means no heat, during these dangerously cold temperatures. Crews on the scene say they are hoping to get power restored by late Saturday morning, but neighbors ABC57 talked to say with these temperatures that’s not soon enough. Crews told ABC57 the transformer that provides much of the town’s power supply unexpectedly shut down around 3 o’clock Friday afternoon and is now under investigation. They say they are now setting a mobile transformer with the hope of getting power to residents by late Saturday morning. In the meantime, even the town’s fire department is running off of a generator. And police say they will be opening the township hall to all residents needing a warm place to stay until the power is back on. “We have Red Cross on standby. We have authorization to open the township hall to any residents that are cold because of the frigid temperatures so we have our contingency plan in effect,” said Covert Police Officer Seigfried Freitag. But some neighbors who wish not to stay at township hall say this inconvenience is costing them money. “I hope that I don’t have to scrap up change to go to the hotel. I’m hoping. But it looks like that’s what I’m going to have to do,” Dorian Gaines explained. Again, crews are hoping to get power restored as soon as possible. But they say this weather is making everything a little more difficult.