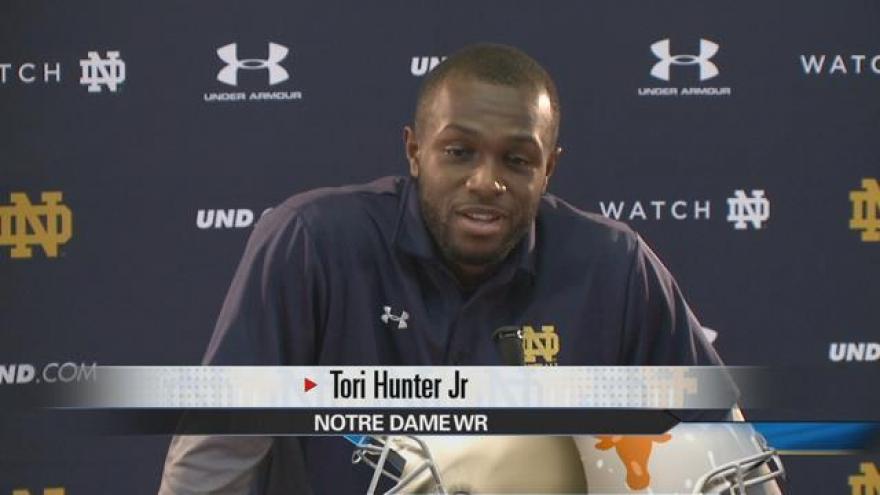 Torii Hunter cleared concussion protocol this week and is expected to give it a go Saturday against Michigan State.

“I’m cleared to do full contact drills, but conditioning wise I’m ready to get back into it,” Hunter said.

Hunter suffered a concussion in week one attempting to haul in a touchdown pass from DeShone Kizer. That’s when DeShon Elliot hit him high causing the ball to come loose and Hunter to lose consciousness.

“I remember everything up until the hit,” Hunter said. “But the next thing I remember I’m taking a step down into the locker room. It was tough the rest of the game knowing I couldn’t be out there with my team.”

Hunter was evaluated late last week but ultimately he and the coaches decided it wasn’t in his best interest, but he said he’s more than ready to get back out on the field.

"It's tough just watching the guys play. You know how much work you've put into it, and to miss a game is definitely tough but I'm excited to be back and to go play with my brothers again,” Hunter said.

The Irish offense has not suffered in his absence. Notre Dame is averaging better than 40 points per game this season, which isn’t a knock on Hunter. If anything, his return makes them more dangerous.

"We've scored 35+ points in both games without really using Torii the way that we can,” Quarterback DeShone Kizer said Wednesday. “He's a veteran guy who's an absolute stud who will probably be the fastest guy on the field and that's the cool thing about it. We've had a little bit of success on offense and we still have a lot more that we can tap into."