Hunter who fell from tree stand advocates for safety harnesses 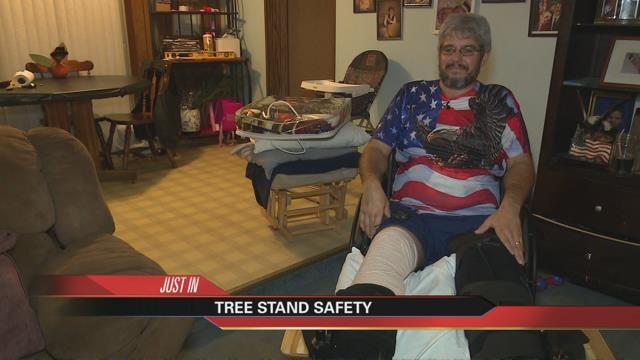 Exactly one week ago today—a hunter fell 20 feet from a tree stand. Now, he’s home from the hospital with seven broken bones and advocating for hunters to use safety harnesses.

It was a calm Saturday afternoon when Mark Miller decided to go hunting—his favorite past time.

He climbed 20 feet up to his tree stand, and the calm quickly turned into catastrophe.

“Standing there and then all the sudden I hear ‘stink!’ and the next thing I know, I’m laying on the ground,” said Mark Miller.

He stared at the sky in shock, felt up and down his broken legs, and prayed that he wasn’t paralyzed.

He now has three broken bones in each leg and a broken sternum.

But all of that could have been prevented if he had just been wearing a safety harness.

“But that system if we have it on, will save our lives. It will keep us from hitting the ground,” said DNR Conservation Officer John Boyd.

The problem is that most hunters share Mark’s initial attitude toward safety harnesses.

Falls from tree stands, however, are the leading cause of hunting injuries and deaths in Indiana.

And Mark became the fourth person to fall this year.

“Depending on how I could have fell out of that tree and where the branches were, I might not be here today,” he said.

So now, he’s become an advocate for safer hunting.

“I love hunting, and I’m not going to stop just because of this. I just know how to do it safer now, and that’s what I’m going to keep preaching,” said Mark.

To prevent at least some of those from happening, he and Mark are both urging hunters to invest in their safety.