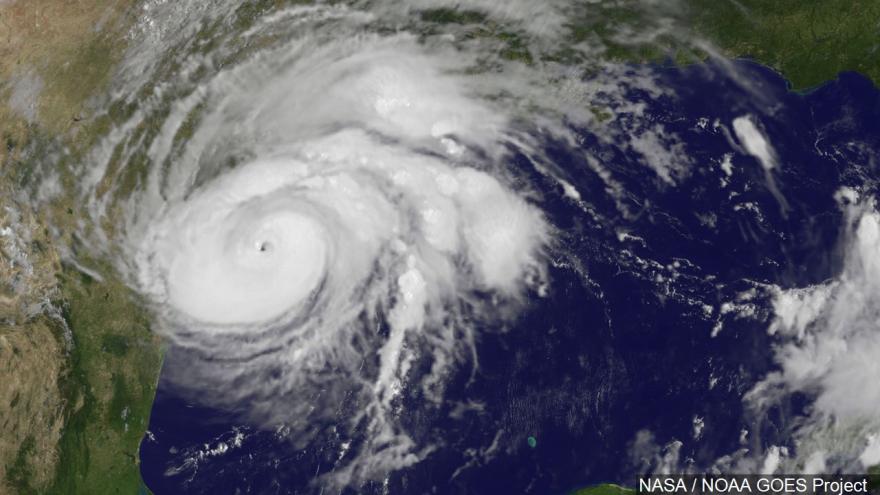 Hurricane Harvey, just hours from making landfall on the Texas coast, has intensified into a Category 4 hurricane with maximum sustained winds of 130 mph, the National Hurricane Center said in a 7 p.m. ET update.

Rockport, Texas, officials are advising residents who refuse to evacuate to write their names and Social Security number on a forearm, Mayor Pro Tem Patrick Rios told CNN. Rios said it will "help out first responders should they find a body."

The outer bands of Harvey began to pummel the Texas coast Friday as one of the most powerful hurricanes in years moved closer to landfall and threatened to douse as much as 40 inches of rain on residents in some areas along the Gulf of Mexico.

Harvey, a Category 3 hurricane, was expected to make landfall by early Saturday, but the heavy rains and strong storm surge that worry forecasters and government officials arrived during the afternoon.

The combination of wind and water could leave wide swaths of South Texas "uninhabitable for weeks or months," the National Weather Service in Houston said.

Such daunting language hasn't been seen by CNN's experts since Hurricane Katrina, which left more than 1,800 people dead in 2005.

A hurricane warning is in effect for about 1.5 million people, with another 16 million under a tropical storm warning, the weather service said.

"Texas is about to have a very significant disaster," said Brock Long, director of the Federal Emergency Management Agency.

Gov. Greg Abbott warned of record-setting flooding and called on people to flee the area before the storm hits.

"My top goal is to be able to make it through this storm in a way in which we lose no lives," Abbott said. "Put your life first and your property second."

Residents were urged to evacuate. A mass exodus from the coast caused extensive traffic jams along the state's highways, while other people boarded up windows and stocked up on food and water ahead of the storm, the effects of which are expected to last for days.

The storm will stall and dump rain on South Texas and parts of Louisiana into the middle of next week, forecasters predicted.

"All indications from the hurricane center are that this is going to be the first major hurricane the nation has dealt with since 2005," Long said.

-- Harvey strengthened to a Category 3 hurricane with winds up to 125 mph.

-- The NWS in Corpus Christi issued an extreme wind warning for portions of the coast through 7 p.m. in Texas. "Widespread destructive winds of 115 to 145 mph will produce swaths of tornado-like damage," the agency said.

-- "We are prepared; we are not panicking," Galveston Mayor James Yarbrough said.

-- The ports of Corpus Christi and Galveston are closed. Three Galveston-based cruise ships in the Gulf of Mexico diverted to safer water.

Those who stay should "elevate and get into a structure that can withstand potentially Category 3 winds from a hurricane," said Long, the FEMA director.

"The bottom line message is, right now, if people have not heeded the warning, again, their window to do so is closing," Long said. "If they refuse to heed the warning, that's on them."

"Over the next five days, we're going to see copious amounts of rainfall, up to 25 inches, possibly, in some areas, with isolated higher amounts," he said. "This is going to be a slow-developing major disaster event for the state of Texas."

FEMA has pre-positioned incident management teams, as well as life-saving and life-sustaining commodities, and search-and-rescue teams in Texas, Long said.

Trump tweeted that he has spoken with the governors of Texas and Louisiana, saying he is "closely monitoring Hurricane Harvey developments and here to assist as needed."

"I would stress that this is a serious storm," Bossert said. "This could remain a dangerous storm for several days."

Officials worried that Harvey's abundant rain will drench Texas and the region for several days.

"We could see this storm park for almost five days in some places, and we hear three feet of rain," said Bill Read, the former director of the National Hurricane Center. "That's just going to be a huge problem for these areas."

Abbott said the state could see record-setting flooding from Corpus Christi to Houston. He encouraged residents to leave now before it's too late.

"This is going to be a very major disaster," he said.

"The water is going to be the issue," Corpus Christi Mayor Joe McComb said. "We've never had anything like this."

Harvey is also causing concern in New Orleans, where heavy rain could usher in as much as 20 inches of rain through early next week and overwhelm the city's already-compromised drainage system.

Bands of rain and wind began to reach the Texas shoreline on Friday afternoon.

Joey Walker, 25, works with the Galveston Island Beach Patrol and is riding out the storm from a house on Galveston Island. He posted video of near-white out conditions overlooking Stewart Beach.

Houston Mayor Sylvester Turner said anyone not leaving should plan to stay off the roads once the storm starts.

"People need to know, this is not a one-, two-day event and done," Turner said. "Even though it may seem like it will get better, this is a four- or five-day event, starting tomorrow evening, going through Monday or Tuesday."

'I'm trying to be strong'

"I'm shaking inside, but for them, I'm trying to be strong," a Corpus Christi woman who was waiting with her two daughters to board a bus out of town told CNN affiliate KRIS.

Workers at 39 offshore petroleum production platforms and an oil rig in the Gulf of Mexico also evacuated Thursday, the Bureau of Safety and Environmental Enforcement said.

First responders such as Brittany Fowler stayed behind and waited for the storm.

"Hopefully it doesn't do any damage, but if it does, we've prepared," Fowler, a firefighter in Corpus Christi, wrote on Instagram.

Fowler's family helped by boarding up windows and doors at her home, and she bought plenty of water, food and a small power generator.

Despite the warnings, Elsie and David Reichenbacher prepped supplies and plan to stay put in Corpus Christi.

"I've gone through a lot of hurricanes. I've lived here most of my life," Elsie Reichenbacher said. "I'd rather take care of my home and my animals and be safe here. I'm on high ground with my house."