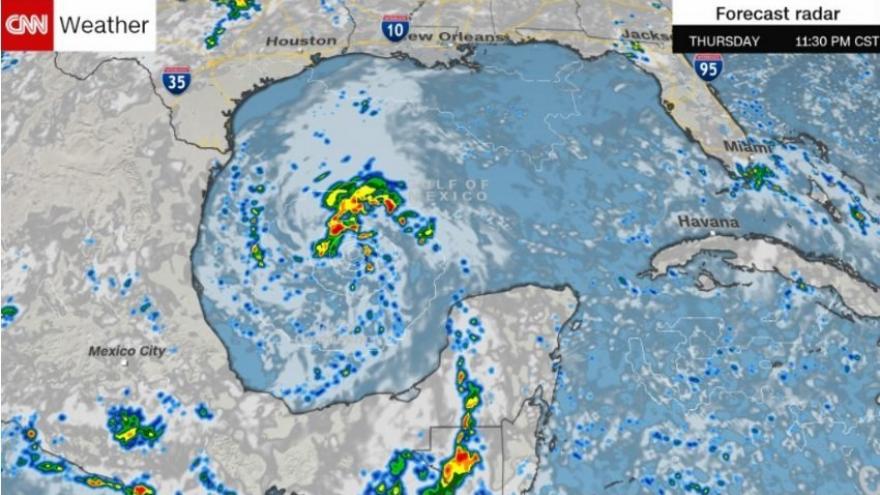 (CNN) -- Highways in Texas filled with cars Thursday into the night as coastal residents made their way north and out of the path of a hurricane that forecasters say will bring "life-threatening" amounts of rain.

Some areas could get as many as 35 inches of rain from Hurricane Harvey and many will get more than a foot, forecasters from the National Hurricane Center said. Harvey has strengthened to a Category 2 storm, with maximum sustained winds of 100 mph, according to the National Weather Service.

As Harvey gained strength Thursday, residents along the Texas coast made the choice to evacuate or stay. Those staying in place aren't taking any chances; they're filling sandbags, stocking up on water and boarding up windows.

Harvey is rapidly becoming more powerful and is forecast to become a Category 3 hurricane with winds of at least 111 mph by the time it hits the middle Texas coast late Friday or early Saturday, the hurricane center said Thursday. After hitting Corpus Christi, the storm is expected to stall over the state, forecasters say.

Northbound Interstate 37 out of Corpus Christi was filled as people evacuated. The highway, which goes to San Antonio, was backed up for miles while the southbound lanes were mostly empty, a photo from Mari C. Rivera shows.

Rose Yepez told CNN it took her twice as long as normal to drive from Corpus Christi to San Antonio. Yepez, who was continuing her travels to the Texas Hill Country, said traffic was constantly slowing down and coming to a stop during the 140-mile drive.

Not everyone is leaving. Rebecca Esparza of Corpus Christi said her family is prepared to stay in their now-boarded up house.

"I want to leave, but I refuse to leave my mom behind," she said, noting that her mom rode out Hurricane Celia in 1970.

"We have lots of bottled water, satellite radio, lanterns, bagged ice," she said.

Amanda Weldy is staying put, too.

She said the family is freezing lots of bottled water to keep perishable food cold. She also plans to have everyone shower Friday morning then fill up the tub in case the water lines get contaminated.

"Mostly we are just making sure our 2- and 1-year-old have everything they need," she said.

Other people around Corpus Christi started stocking up Wednesday on food, bottled water and other essentials.

Many residents of South Texas readied sandbags, fueled up power generators and bought plywood to board up their windows, CNN affiliate KRIS reported.

At 11 p.m. ET, Harvey was a Category 1 hurricane with 85 mph winds. It was about 250 miles southeast of Corpus Christi, and was moving northwest at 10 mph.

Compounding potential problems is the tidal cycle. If peak storm surge arrives during high tide, parts of the coast could see 1 to 8 feet of flooding, with the potential of 6 to 12 feet between Padre Island National Seashore and Sargent, Texas.

There are evacuation orders in many counties and cities, including Victoria, near where the eye of the storm may hover for days.