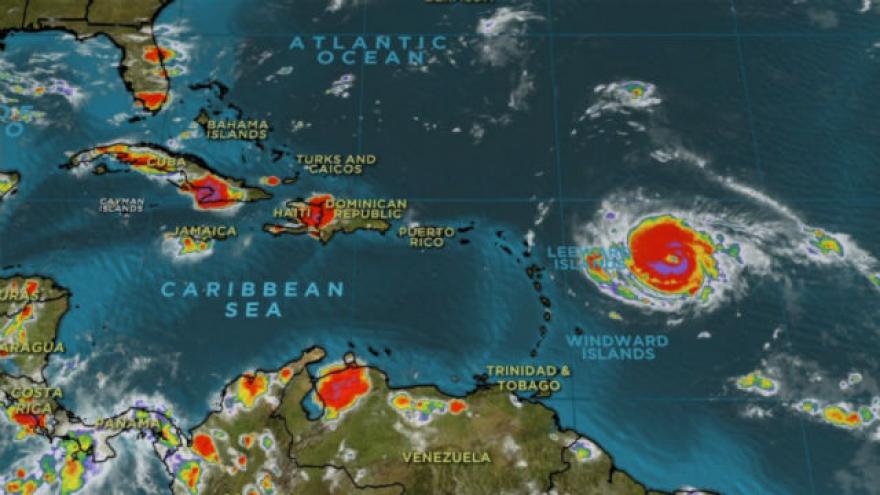 Hurricane Irma has strengthened to a Category 5 storm, with maximum sustained winds of 175 mph, data from a hurricane-hunter aircraft show. Photo courtesy CNN

(CNN) -- Hurricane Irma hit Barbuda early Wednesday, thrashing it with high winds as it marched on to other islands along its path on the Caribbean.

The massive Category 5 storm packed winds of up to 185 mph, the US National Hurricane Center said. It aimed at several islands, including Puerto Rico, Antigua, St. Kitts and Nevis, and the US Virgin Islands.

"The beginning of the curfew coincides with the expected arrival of heavy rain and strong winds associated with Irma," he said in a statement.

Under curfew restrictions, anyone without authorization should remain indoors to allow crews to clear roads and restore services without disruptions, he said.

In the US territory of Puerto Rico, residents boarded up windows and lined up at stores to buy water that was hard to come by. Winds howled overnight.

The storm churned toward Caribbean islands early Wednesday, sending panicked residents stocking up on food and water, and an anxious Florida wondering how badly it'll get hit.

It's too early to tell whether it will make landfall on the US mainland, but forecasts show it could churn toward Florida over the weekend.

Jimmy Brumbaugh packed up his family in their RV and left Astatula, Florida, for Georgia, to wait out Hurricane Irma. As he headed out of town, he posted a picture showing a long line of cars, waiting to get gas.

"People are genuinely scared down here," he said. "... We are dead center in the state but I'm not taking any chances, I also don't want to put my family through the misery of riding out the storm we've done it before and it's horrible."

In Eustis, northwest of Orlando, Pat Arnold and her husband took precautions in case Irma hit.

"My husband and I prepared for Irma by getting some cash out, fueling cars and filling gas cans with non-ethanol gas (for use with our chainsaw if needed), ... and making sure we have enough batteries, canned food etc," she told CNN.

She posted a picture showing bare shelves at her local Publix.

From Miami Beach to Ocala, Florida residents braced for the storm, with some posting images of empty shelves at local grocery stores.

Forecasters are mostly concerned about the northeastern Caribbean, according to Michael Brennan of the hurricane center.

"Anguilla, all the way toward (Antigua and) Barbuda, all the way up even toward the British Virgin Islands (are) in grave danger of an eye wall hit at (at least) 150 mph -- that devastates the island, no matter what island it is," CNN meteorologist Chad Myers said.

Those islands are under hurricane warnings, as are Puerto Rico, the US and British Virgin Islands, Montserrat, St. Kitts and Nevis, Saba, St. Eustatius, St. Martin/St. Maarten, and St. Barts.

The hurricane center warned the storm is "potentially catastrophic," especially if the worst conditions hit islands at high tides.

Irma's forecast track currently has it near or over Antigua and Barbuda, St. Kitts and Nevis, and Anguilla by early Wednesday, and the British and US Virgin Islands and Puerto Rico on Wednesday afternoon.

The Dominican Republic issued a hurricane warning Tuesday that included coastal cities from Cabo Engaño to the northern border with Haiti.

Preparations to protect life and property in those areas "should be rushed to completion," the hurricane center said.

For hours, people lined up outside hardware stores, hoping to get plywood, batteries and power generators. If Irma knocks out power, Puerto Ricans said they are worried it would take weeks or months before it is restored.

One of those is the shortage of employees. Many workers recently retired or left their jobs for better prospects on the US mainland, Ramos Rodríguez said.

While Irma's exact path is uncertain, wary shoppers stood in long lines outside some stores Tuesday in Florida as residents prepared for the storm.

"I would rather inconvenience our residents" with evacuations than suffer loss of life, Gimenez said.

Schools and county offices will be closed on Thursday and Friday.

And the state's Monroe County, which includes the Florida Keys, said it will order visitors to evacuate by sunrise Wednesday, and residents should begin to evacuate 12 hours later.

In Florida, people were standing in lines at stores to buy water and other goods on Tuesday.

In Miami, supermarkets and other stores were already selling out of water and nonperishable food.

After declaring a state of emergency across Florida, Gov. Rick Scott said President Donald Trump had "offered the full resources of the federal government."

White House Homeland Security Adviser Tom Bossert tweeted that the President had declared emergencies for Florida, Puerto Rico and the US Virgin Islands.

"I cannot stress this enough. Get prepared," Scott said at a news conference. "Learn your evacuation zone. Listen to your locals. This storm has the potential to devastate this state. You have to take this seriously."

Irma has become one of the strongest storms recorded in the Atlantic, and is threatening to slam into Caribbean islands including Puerto Rico and the Virgin Islands with "potentially catastrophic" force on Wednesday, the National Hurricane Center said.

Irma was churning west Tuesday in the Atlantic with maximum sustained winds of 185 mph -- well above the 157 mph threshold for a Category 5, the hurricane center said.