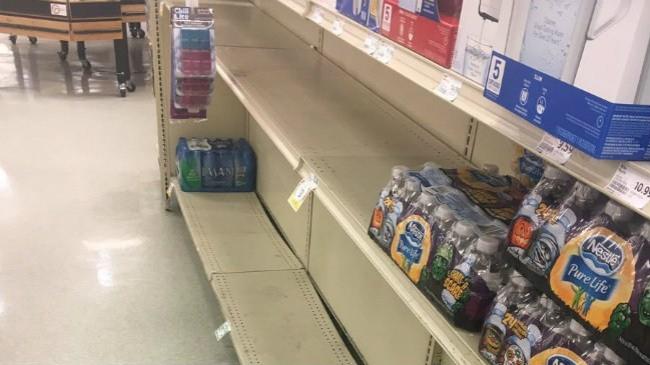 (CNN) -- Florida is not experiencing any gas supply or distribution shortages as Hurricane Matthew approaches, Gov. Rick Scott told reporters Wednesday. "We have heard of some individual stations (being) short, but in no area of the state are we short of fuel," the governor said, adding that the state has placed fuel in some areas.

With Hurricane Matthew ready to slam the United States in the next day or two, time is running out to get ready.

"I cannot emphasize enough that everyone in our state must prepare now for a direct hit," Florida Gov. Rick Scott said Wednesday.

"That means people have less than 24 hours to prepare, evacuate and shelter. Having a plan in place could mean the difference between life and death."

Matthew has already killed 10 people and carved a trail of destruction in several Caribbean countries. Next in its path: the Bahamas and United States.

As of Wednesday afternoon, Matthew hurled 120 mph (195 kph) winds as it churned toward the Bahamas, the National Hurricane Center said.

The hurricane was about 70 miles (115 kilometers) south of Long Island, Bahamas, and was moving northwest at 12 mph.

Forecasters predicted Matthew will strengthen to a Category 4 hurricane by the time it lashes Florida, Georgia, South Carolina and North Carolina sometime between Thursday evening and Saturday.

President Barack Obama warned Americans in the storm's path to pay attention and take any evacuation orders seriously. He said if the core of the storm strikes Florida, it could have a "devastating effect."

Scott declared a state of emergency for the entire state. He warned that a direct hit by Matthew could lead to "massive destruction" on a level unseen since Hurricane Andrew devastated the Miami area in 1992.

Brevard County commissioners ordered one of the state's first mandatory evacuations for residents of Merritt Island and other barrier islands. Residents must leave starting at 3 p.m. Wednesday.

Palm Beach residents already cleared many grocery store shelves ahead of the storm.

In Juniper, Florida, resident Randy Jordan told CNN affiliate WPEC people were pushing and shoving their way through the local Home Depot to buy supplies ranging from batteries to flashlights.

"The vibe on the street this morning is pre-panic," Jordan said. "By tomorrow, it should just be a brawl."

The threat in South Carolina is so severe that schools and government offices in 25 counties are closed Wednesday. Some schools will double as evacuation shelters.

In addition to the evacuation orders for Charleston and Beaufort counties Wednesday afternoon, Haley ordered Horry and Georgetown counties to evacuate by Thursday morning.

The South Carolina Department of Transportation has started changing the directions of traffic lanes to accommodate the exodus of people leaving coastal cities like Charleston.

By 3 p.m. Wednesday, lanes on Interstate 26 will also be reversed to help residents flee.

Gov. Pat McCrory declared a state of emergency for more than half the state's 100 counties.

And North Carolina tourists have been told to cut their vacations short.

State emergency officials said they expect up to 8 inches of rain and brutal winds starting Friday.

"Many of our central and eastern counties are already saturated from storms during the past few weeks," North Carolina Emergency Management Director Mike Sprayberry said.

"We are preparing for additional flooding, downed trees and widespread power outages in the coming days."

The University of North Carolina-Wilmington has also ordered students to evacuate no later than noon Thursday.

Georgia Gov. Nathan Deal has declared a state of emergency in 13 counties on or near the Atlantic Coast.

"We urge residents in these areas to remain calm but vigilant as they prepare for potential impact," Deal said.