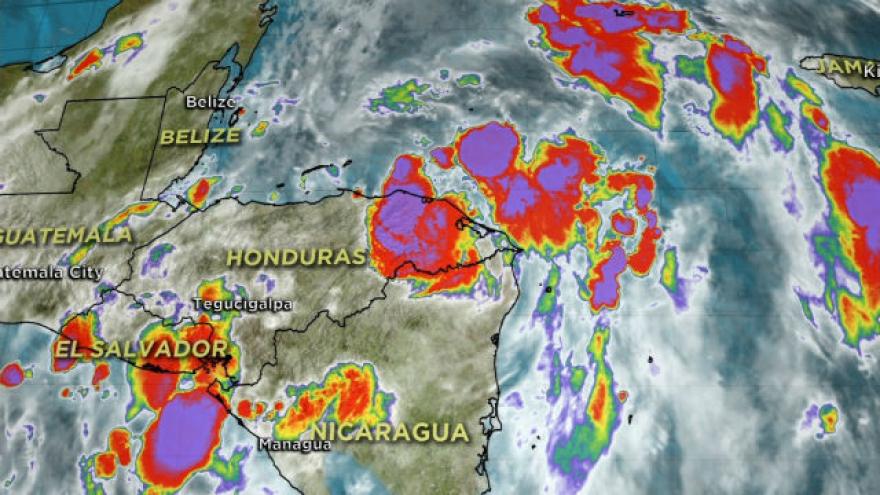 After battering portions of Central America, New Orleans and much of the US Gulf Coast are gearing up for possible flooding and damaging winds ahead of Hurricane Nate\'s projected landfall this weekend. Photo courtesy CNN

Packing winds of 85 mph and moving at 22 mph, the Category 1 hurricane was 245 miles from the mouth of the Mississippi River at 11 a.m. ET, the National Hurricane Center said in its latest advisory.

The quick-moving storm was expected to bring sustained winds of 90 mph and could make landfall around Plaquemines Parish in Louisiana, southeast of New Orleans. That's near where Hurricane Katrina, which devastated New Orleans and the Mississippi Gulf Coast, made landfall in 2005.

Some mandatory evacuations had been ordered in areas outside levees in New Orleans and Plaquemines Parish. President Trump on Friday declared an emergency in Louisiana ahead of Nate and ordered federal assistance to supplement state and local response efforts.

The storm was expected to knock down power lines and trees from Lake Charles, Louisiana, to the Florida Panhandle and possibly leave at least 1 million people without electricity.

Nate could drop 3 to 6 inches of rain, with 10 inches possible in some areas, from the central Gulf Coast north across the Deep South, the eastern Tennessee Valley and the southern Appalachians through Monday, the hurricane center said. Flash flooding is a danger.

"Once it hits land, it looks like it's going to be very quick to move out of the area and then weaken," CNN meteorologist Jennifer Varian said.

Hurricane warnings were in effect along the Gulf Coast, from New Orleans, including Lake Pontchartrain, and Grand Isle, Louisiana, east to the Alabama-Florida border. A storm surge warning was in place from Morgan City, Louisiana to the Okaloosa-Walton county line in Florida.

Nate could be the third hurricane to hit the US mainland in six weeks. Hurricanes Harvey and Irma tore through some coastal states, killing dozens and destroying thousands of properties.

The storm had already left a path of devastation in Central America. At least 25 people were killed Thursday in Costa Rica, Nicaragua and Honduras. Hundreds were rescued from floodwaters and mudslides. Many lost power and running water.

New Orleans Mayor Mitch Landrieu on Friday ordered a mandatory evacuation of the Venetian Isles, Lake Catherine and Irish Bayou areas, which lie outside the federal hurricane-protection system that was fortified after Katrina. Landrieu on Thursday declared a state of emergency.In preparation for overnight flooding, Landrieu also announced a mandatory curfew. It goes into effect Saturday at 6 p.m. CT and ends Sunday morning.

Of the city's 120 main drainage pumps, three major and eight smaller ones were offline Friday night, city records show. Also, all 24 major pump stations had backup generators, records show, as only three of five turbines that help power the city's oldest, most powerful pumps were available for service, and a city water utility spokeswoman told CNN.

Gov. John Bel Edwards declared a state of emergency for all of Louisiana and mobilized 1,300 National Guard troops ahead of the storm. Some would help monitor New Orleans' drainage equipment, he said.

"We are taking the potential impacts of Tropical Storm Nate seriously and mobilizing all of the state's emergency preparedness and response mechanisms for a full readiness should this storm severely impact our state," Edwards said.

Mississippi Gov. Phil Bryant signed and declared a state of emergency for six counties and any others that might be affected by Nate, the state's emergency management agency said.

About 90 miles northeast of New Orleans, Biloxi Mayor Andrew Gilich was especially concerned about storm surge, a gradual rise in the water level caused by a major storm's wind as it nears shore.

"The storm surge is a big thing that really traps everyone," he told CNN.

Nate could usher in a storm surge of 5 to 9 feet along the Mississippi coast, the hurricane center said. That's far below Katrina's catastrophic 20-foot surge but still cause for precautions, possibly including evacuations, to be taken in some places.

Nate's projected landfall was already having an impact on flights and a key Gulf Coast port.

The Port of Mobile closed Saturday, meaning the Carnival Fantasy cruise ship would not be "making its scheduled call in Mobile" on Sunday, the Mobile Alabama Cruise Terminal said.

"We recommend passengers stay tuned to communications from Carnival and also check their website for itinerary updates," the terminal said. CNN reached out to Carnival for details.

In Mobile, city workers were checking storm drains for debris, taking measures to avert power outages and deploying critical equipment. Along the coast, beaches were ordered to close and some voluntary evacuations were ordered, officials said.

The Bankhead Tunnel, a downtown major thoroughfare that passes under the Mobile River, has been closed because of Nate, emergency officials and a reporter with CNN affiliate WPMI tweeted.

Meanwhile in Mississippi, the Air Force Reserve's 403rd Wing relocated its aircraft to Texas and Arkansas.

"We are moving aircraft as a precautionary measure ahead of Tropical Storm Nate, and so we can continue the mission," said Col. Jennie R. Johnson in a statement.

Kessler Air Force Base in Biloxi was not evacuated, officials said.