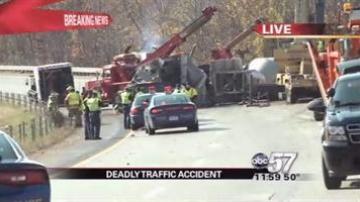 BERRIEN COUNTY, Mich. -- Another fatal crash happened just after 8 a.m. It happened on I-94 in Berrien County, near St. Joseph, Mich. A semi flipped over and one person was killed.

Troopers are working out at the scene right now. Again, the west bound lanes are closed and traffic is being rerouted.

ABC 57's Ryan Klund is at the scene and sent back video of what the damage looks like. Police say the semi served to avoid a flat bed trailer that fell off of a pick-up truck. The semi driver lost control and the truck jack-knifed. It rolled over, killing the driver.

The victim was an elderly man. EMTs tried to resuscitate him with CPR, but he died at the scene of his injuries.

The semi truck was carrying grain.

As of noon on Friday, the I-94 westbound lane is closed between Marquette Woods and John Beers Roads between mile marker 22 and 23.  Crews are working to clean up the truck and spilled diesel fuel.