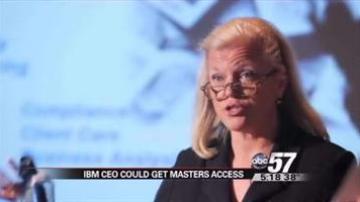 The Masters Tournament 2012 is officially underway.

It bestows one of the most coveted prizes to golf champs, the Green Jacket. Augusta National Golf Club is also known for something else, never having a woman in its ranks.

That could be changing.

The exclusive club has traditionally given membership to the CEOs of the Masters three corporate sponsors, one of which is IBM.

It's headed by Virginia Rometty who is a golfer. Club officials haven't said what they'll do in regards to a membership offer, but IBM has a history of changing policy.