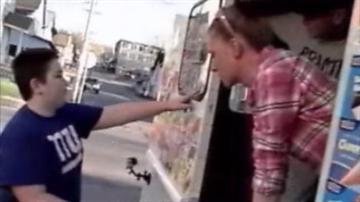 They are accused of following Philip Hollister as he tried to drive his truck around selling ice cream.

Hollister says the duo tried to scare him out of business and was willing to steal customers.

"If I have someone behind me blaring their music and offering free ice cream it's a little ridiculous," said Hollister.

Police say they have had similar issues with the owner of Snow Cone Joe in the past.