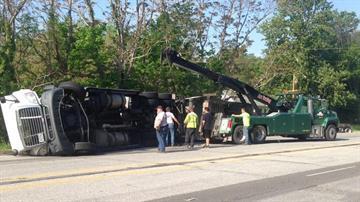 ROLLING PRAIRIE, Ind. -- A semi carrying ice cream overturned after colliding with a vehicle at US20 and SR2 in Rolling Prairie around 8 a.m. EST Monday morning.

According to the LaPorte County Sheriff's Office, a woman in a Honda driving west swerved and her car struck the semi that was heading east.

The driver of the Honda was taken to a nearby church where a helicopter landed to take her to the hospital.

A husband, wife and two Chihuahuas were inside the semi when it overturned.

The man was taken to the hospital, the woman was uninjured. The dogs were not injured and were temporarily taken to the shelter.

The semi was carrying 54,000 pounds of ice cream. They had to turn the compressor off because they were afraid it would start a fire.