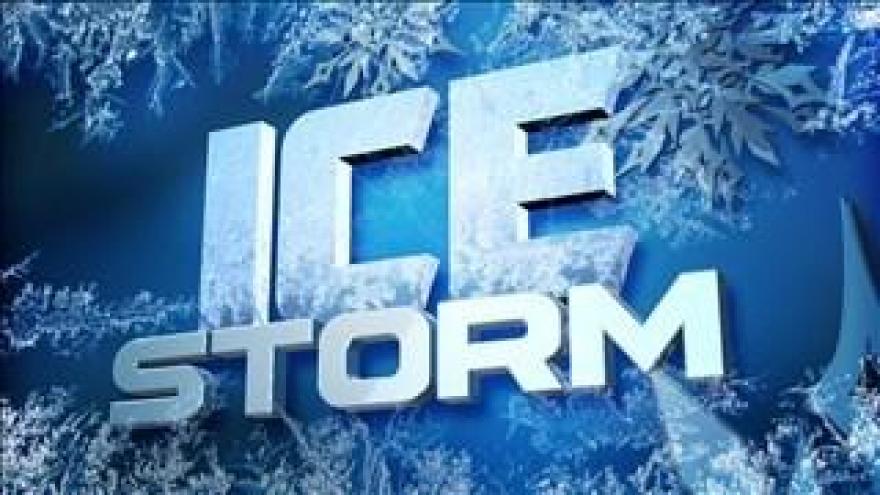 (CNN) -- The icy weather will linger a bit longer.

The major winter storm affecting parts of the central United States and upper Midwest will continue through Monday, according to the National Weather Service.

A wintery mix of snow and ice is expected from the Central Plains over into the Great Lakes on Monday as additional weather systems intensify and move northeast through Tuesday, the National Weather Service said.

The storm will push north and then east and impact cities like Chicago, Green Bay and Detroit on Monday. It will then head to Rochester, New York, and Springfield, Massachusetts, on Tuesday into Wednesday, said CNN meteorologist Allison Chinchar.

Warm, southerly air will move into the system as it pushes into the Ohio Valley, Chinchar said.

The wintry precipitation is expected to turn into mostly rain as it advances into the Northeast by late Tuesday and Wednesday.

In other parts of the country, significant freezing rain and ice will hit Central Kansas and Eastern Nebraska and move towards Central Iowa on Monday.

On the southern side of the storm, severe weather moved through Texas with one tornado reported outside of Dallas in Grand Prairie, Texas. Some damage has been reported to homes and an airport hangar. No injuries were reported.

Heavy rains were also an issue from Dallas to San Antonio where flash flooding occurred.

Ice in Oklahoma, Kansas and Missouri

More than 17 million Americans are under some type of wintry watch, warning or advisory from the storm in the Midwest, and 3.8 million of those fall under an ice storm warning.

The hardest-hit states of Oklahoma, Kansas and Missouri will continue to see up to 1 inch of ice coating trees and roads, making travel tricky and potentially bringing power outages to millions of residents.

Dangerous travel conditions remain a problem with numerous accidents reported due to the icy roadways.

Oklahoma Gov. Mary Fallin declared a state of emergency for all 77 Oklahoma counties on Thursday.

Nearly 21,000 customers are without power across Oklahoma, the city's Department of Emergency Management told CNN.

A multi-vehicle crash on Saturday led to one motorist being ejected and struck by an unidentified vehicle going southbound on Interstate 29 in Platte County, the Missouri State Highway Patrol said. Also on Saturday, another vehicle overturned on an ice covered roadway in Nodaway County and the driver was ejected.

On Friday a motorist died after she lost control of her vehicle on an icy overpass on Interstate 55 in southeastern Missouri.

The icy conditions caused another weather-related death in Custer County, Oklahoma. A motorist died during a traffic collision in the western part of the state, which resulted in a multi-vehicle pile up on Interstate 40, the Oklahoma Highway Patrol said.

Oklahoma area hospitals have reported 65 weather-related injuries, the city's Department of Emergency Management told CNN. The majority of those hurt were injured in falls.

In Kansas on Saturday, winter weather conditions caused a fatal car crash in the southwestern part of the state, according to Kansas Adjutant General's Department.

A Kansas Highway Patrol trooper narrowly steered clear of injury on a Kansas interstate Sunday morning when the driver of a semi-truck lost control at a median crossing, police said.

The dramatic video was captured on the patrol car dashcam and later posted to Twitter and Facebook.

The incident happened as the Trooper was traveling east in Russell County on Interstate 70.

No one was hurt in the incident.

The NFL rescheduled a playoff game because of the ice storm.

The Kansas City Chiefs game against the Pittsburgh Steelers was moved to 8:20 p.m. ET on Sunday instead of 1:05 p.m. ET, due to "public safety concerns in light of the forecasted storm" at the Chiefs' stadium, the league said.

Kansas City was to see significant icing through the morning on Sunday, changing over to rain early in the afternoon. Moving the game back seven hours was expected to reduce the danger of icy roads for those traveling to the game.

Field crews spent the night at Arrowhead Stadium to ensure they could keep the field in good condition, CNN affiliate KCTV reported.

The field was covered with a tarp on Saturday and warm air was pumped in to prevent ice accumulation, KCTV said.

Due to expected power outages and limitations on travel, the Kansas Department of Emergency Management warned citizens to "make sure their home emergency kits are stocked for a 3-day supply."

Click here for a list of what you should include in your emergency supply kit, according to the Department of Homeland Security.