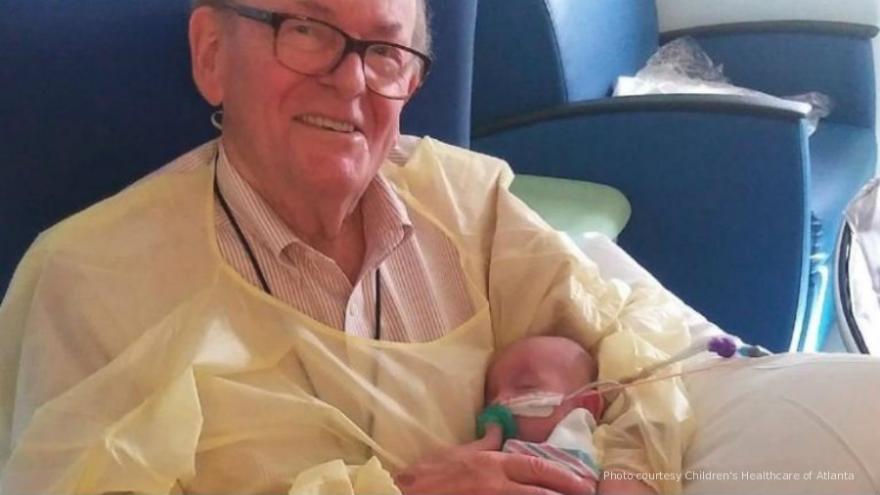 (CNN) -- With the preemie cradled in his arms, the retiree glanced toward the entrance of the pediatric intensive care unit.

The child's mother stood at the door, David Deutchman later recalled. She'd gone home to take care of her older daughter, all the while worrying about the baby boy whom she'd left the previous night at the Children's Healthcare of Atlanta hospital. Now she was back.

"Who are you?" the mother asked, peering at this stranger holding her swaddled son, life-sustaining wires taped to his tiny cheek.

A photo posted Friday morning on Children's Facebook page shows Deutchman holding Logan, the sleeping infant, who was born at 25 weeks. Within hours, the post had been shared more than 160,000 times.

From board rooms to bear hugs

After retiring from his job as an international marketing executive in 2000, Deutchman became a guest lecturer at Atlanta-area universities, mostly Georgia Tech and Emory, he said. But it didn't fill enough of his time.

As he left a rehab appointment for a leg injury, Deutchman stopped into Children's nearby.

"I decided to walk in there, just wondering if they had volunteer opportunities," he told CNN. "They did, and they were happy to take me on board."

With experience at the helm of a classroom, Deutchman first went to work in the hospital's school for long-term patients. Then one day, he was startled by encounters with two patients' mothers.

"I went to help escort a child to the school room, and the mom said she's going into surgery," Deutchman said. "She followed me into the hallway and proceeded to tell me every detail of the child's condition and what's going on."

Awed that the mom told a virtual stranger all about her child's condition, he then saw another mother walking out of the pediatric intensive care unit, looking upset. Her son had been flown to the hospital the previous night, she said, and his condition was dire.

"She comes into my arms and starts crying," Deutchman said. "After that day, I went to the volunteer office and told them, 'I now know what I want to do at the hospital.'"

Now, twice a week, Deutchman spends the day in the pediatric and neonatal ICUs, holding babies and helping their parents.

"Sometimes I get puked on, I get peed on. It's great," he says in a video posted by Children's.

Deutchman's friends ask why he'd put up with that.

"They just don't get it, the kind of reward you can get from holding a baby like this," he says.

Cradling fragile babies has been shown to improve their health, said Elizabeth Mittiga, a NICU nurse at Children's.

"It definitely helps just feeling that comfort, that warmth," Mittiga said in recorded remarks provided to CNN by the hospital. "It definitely helps them to, I think, grow faster and put more weight on, and feeding-wise, can help them digest their feeds better and things like that."

"Some leave with developmental disabilities and lifelong special needs," he told CNN. "And that's tough. That's a memory that's not necessarily a positive one."

The best cases end with kids who go home healthy -- and grow up strong.

"The good times have been spending six months with a family, and the kid had ups and downs, and the kid came out great," he said. "Now the kid is 4 or 5 years old and is terrific. Those are the stories I love."

With his new social media fame, Deutchman has been reliving those stories, as thousands of parents have commented on the photo of him with Logan, reminiscing about the times the ICU Grandpa held their child.

"It was very worthwhile doing," he said. "It was important doing."