Illegal dumping a consequence of tightened budget in Benton Harbor 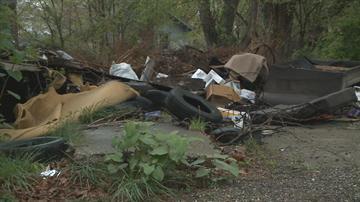 BENTON HARBOR, Mich. - Emergency manager Joe Harris has the struggling city’s finances on track but many are noticing the trash pile up.

ABC 57 was contacted by an employee of the Benton Harbor Public Works department saying the city can’t keep up with the amount of illegal dumping in Benton Harbor because staffing levels are so low.

“That’s from a car right there,” said Duane Hicks pointing out a pile of trash.

“You see that?” Hicks asked. “That’s from a house they’re rebuilding and it’s wasn’t this house. Someone dropped it here.”

Hicks lives near the alley between Vineyard Street and Washington Street. He’s seen trash piling up more than ever before. He said he and his neighbors are sick of cleaning up after other people.

“You see this is a good neighborhood and we try,” Hicks said. “But we don’t get any help.”

Hicks and his neighbors have taken it upon themselves to clean the alley near The Community Church of God in Christ on Nate Wells Drive. He said the city isn’t helping with dumping as much. “A whole lot less,” he said.

The Public Works employee that contacted ABC 57 said, compared to 2010, only a third of inspectors and workers are on the streets.

“The city is doing what they can with what they have to work with,” said Hicks. He doesn’t blame them for trying to make ends meet but said it would be nice to have a clean neighborhood.

“When I was a kid I’d play in these alleys. Now I wouldn’t let my dog run down it.”

ABC 57 contacted both Emergency Manager Joe Harris and Director of Public Works Darwin Watson. As of Friday night neither had contacted back for comment.