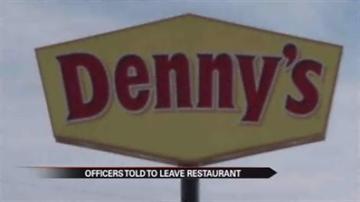 The restaurant in Belleville told the detectives they had to leave unless they got rid of their weapons.

A Belleville police captain said the management approached the detectives and said that customers had complained about the weapons. The detectives did identitfy themselves but were told they or their weapons had to go.

"As they were leaving another manager came out and said 'they are police officers, its okay' but they decided at that point they had been harassed enough, they had been embarassed more than enough, so they excited the restaurant," said Captain Don Sax.

Denny's apologized releasing a statement that said officers are allowed to carry their firearms in the restaurant and they regret any misunderstanding.