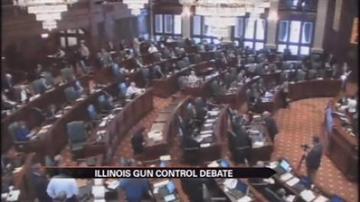 It would be a felony to possess an assault weapon or high-capacity ammunition magazine but exemptions would be made for police, jail and prison superintendents and military members.

Most house Republicans did not vote at all and say the proposal is just a political charade.

"At the end of the day, this is not about public safety. This is all about politics," said Representative Dennis Reboletti, Addison.

"These are no games, these are human lives," said Representative Edward Acevedo, Chicago.  "Yes, the gang issues are correct. The drug dealers, yes. What about people in Aurora? What about the kids in Sandy Hook?"

The Illinois house still needs to vote on the proposal as a whole.