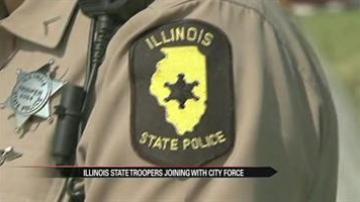 CHICAGO, Ill. -- The State of Illinois is stepping up its involvement in Chicago's growing problem with gun violence.

Nearly 40 Illinois State Police officers have been called in to hit the streets.

They will join the Chicago Police Department's fugitive unit and help search for wanted criminals.

Over the Fourth of July weekend more than 60 people were shot and nine were killed.
Share this article: